Originally the idea of retracting the keyboard was going to be a linear slide like a hidden weapon. The most recognizable would probably be the hidden blade from Assassin's Creed. Linear motion is usually more difficult than rotary motion. One idea which was being considered was simply flipping the keyboard 180° at the wrist. In this scenario the keyboard would also be flipped 180° and lay against the forearm opposite the way it would lay against the palm.

A new idea was explored which used a four bar linkage in a parallelogram configuration. This idea was demonstrated by moving a writing implement back and form while servos traced the path then animated. With this configuration the motion was simple while building a strong structure. The moving parts also fit with the desired look.

After a rudimentary sketch and servo placement a more detailed sketch was made. The second sketch had blanks in the locations where actual measurements would be made. Dimensions in the drawing were not to scale on paper or to each other. The servo arm was also sketched. Two will be required. Servo arms would rigidly connect to the servo horn at one end and form a hinge at the other end. 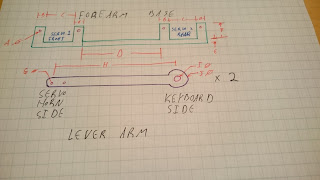