September 07, 2015
Projects on my blog have failed before. Failure isn't a phrase I use often because I believe that anything can be useful so failure happens when something is left incomplete. An incomplete project never gives the satisfaction of looking at something and thinking, "This exists now and it didn't a moment ago." This blog doesn't do what most other maker blogs do and give a long post at the completion of something where only the usable pictures are posted and mistakes are never mentioned. Unusable techniques aren't mentioned either. Instead this blog tells it all as it happens so failure, in these terms, is possible every single day you read this.

According to Adam Savage's 10 Maker Commandments I encountered the effects of #7. This project became discouraging.
There were more little details like having to pry parts away with so much force that my fingernails got sore. I wanted to push everything away. I wanted to stop working and read a book in the bathtub. I wanted this thing to come into existence but I wanted it to exist without any more trouble on my part. I wanted to just buy an off-the-shelf solution. Of course there wasn't any such solution.

Despite being discouraged I kept plugging away. Rather than pushing straight forward I did something I haven't tried before, I attacked the problems that were discouraging me.

Servos were mounted securely with #2 wood screws. Small holes had to be drilled first since the printed pieces didn't have sufficient clearance. While turning the servos previously the motors would occasionally twist because they were not fastened which caused confusion and some grief. All hinge points were tightened to ensure levers could be held straight when mounted. Levers which weren't straight had their mounting points adjusted by changing their positions on the bolt cross members chosen for that ability. 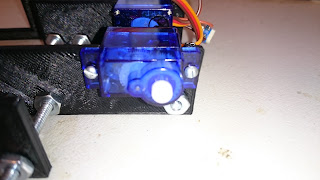 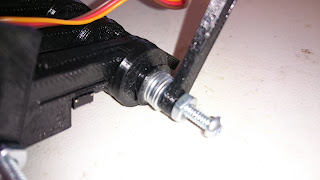 Finely adjusted bolt with washers for spacing on pinky side 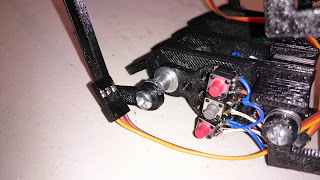 Thumb side of bolt from above picture

Once assembled and tightened the structure would stand freely without sagging like before. Manually moving the keyboard back and forth was not difficult. Yesterday's Arduino program was connected to the servos and fluid motion was possible. Less binding and twisting was seen in the servos. Video was shot to demonstrate the movement with the tuned device. 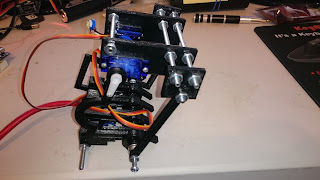