September 12, 2015
Last week I started making offset arms for the levers and they worked well so I continued this week. One finicky lever arm needed a half-circle in order to clear a spindle. This wasn't actually hard except I couldn't get the measurement correct. I printed four versions before I got it right. Measure twice.... 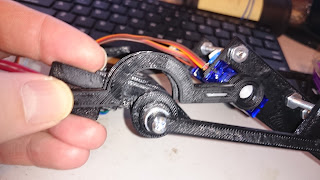 Two of the incorrect prints 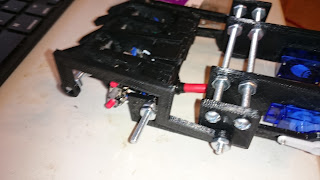 It was difficult to make levers capable of accommodating the range of movement I wanted but I finally got them all in place. Once in place it was possible to turn on the servos and see some movement. At first the movement was clunky and unreliable but some careful alignment and tightened bolts cleaned up the movement and I finally saw nice fluid movement. Not only that but the servos responded synchronously and I couldn't detect any indication they were fighting each other. The power of the two servos combined for a strong movement.

The careful alignment necessary for fluid movement was not a surprise. Previously, the parts were assembled hastily to quickly detect any huge issues. Once the approximate positions of the parts was solved and there was clunky movement the tuning process eliminated the clunkiness. With the positions corrected it was possible to measure the distances and print off spacers which would take out the guess work. Using spacers also reduced the number of nuts necessary and the assembly time was drastically reduced. 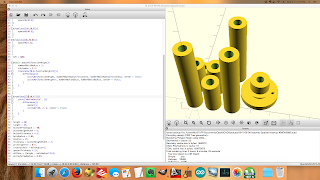 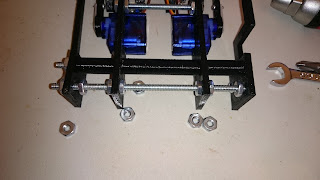 First row of spacers at the top 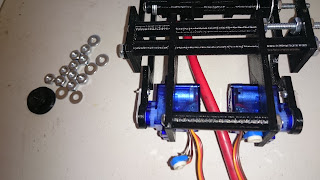 Ffleurey made an awesome parametric enclosure but my printer was acting funny so I assumed that model was the problem. It probably wasn't. Under that assumption I made my own parametric enclosure which was simpler than his but followed in the idea of how ffleurey made the screw receptacles using spherical shapes which don't need supports to print. Finally, the schematic was finally sketched. It shouldn't contain any surprises and someone could probably have figured it out anyway by reading the posts and looking at the pin declaration in the Arduino program. 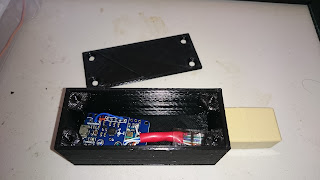 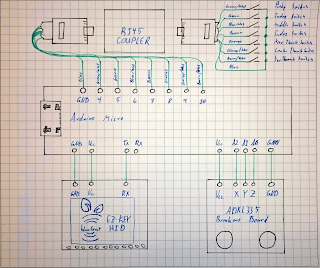 Sketch of schematic for the keyboard