October 02, 2015
Long #6 bolts were trimmed to fit the length needed to act as cross members holding the keyboard platform. Nylon insert locknuts were used on the ends of the bolts once they were installed. The locknuts were not put on tightly, they were positioned with only a small gap so the pieces would behave as a hinge. Tightening the bolts too much would have made movement difficult. 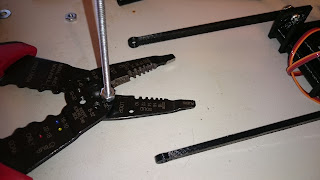 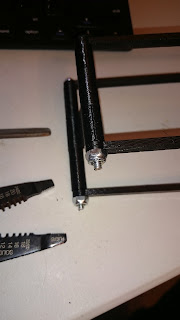 An elastic wrist band was worn which would be comfortable for long periods. Velcro strip with hooks on one face and loops on the opposite face was cut to length so it would be long enough to wrap around the wristband and the base of the servo mount. The strip was wrapped so the loops were on the outside since they would be in contact with skin. Fortunately a single strip was strong enough to hold the mount in place and the wrist band was thick enough to keep the mount from touching the skin with too much pressure which would have gotten uncomfortable. 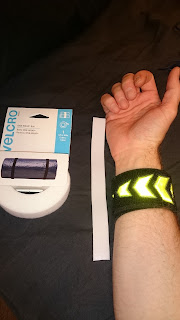 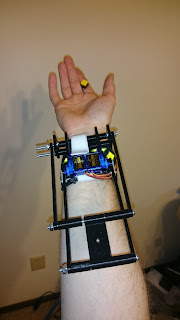 Electronics were connected and a portable USB battery pack was used to power the controller. A serial↔USB converter was still being used to deliver power so power terminals will have to be added when an enclosure is made. This will probably be a micro USB port since those breakout boards are inexpensive and stocked. Motion was recorded as video and sequential photos. Tuning will need to be done so there is no inconsistent motion which appears as occasional jerking in the video. Levers won't be reshaped to allow for further rotation since the range of motion is enough to hold a keyboard in place or deliver it to the palm.