Manufactured infrared proximity detectors had a prescribed range for which they were effective. Inexpensive sensors were short range and prone to unreliability. With these unknowns it seemed like a good time to try a technique where a LED was used as a photodiode. In these instances an LED was put in backward, with the longer lead, anode, attached to Vcc and the shorter lead, cathode, attached to an input. When light hits the LED voltage was passed and the input went high. Parts were arranged and this was tested and found to be true. Unfortunately the LED being used was not filtered with an IR pass lens so visible light was capable of activating the input which can be seen in the video. Emitters and photodiodes can be purchased which have a tinted lens meant to filter visible light and pass infrared light. 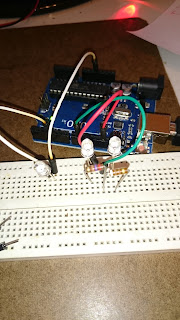 Circuit testing an LED as an input


Video showing how an LED can be used as a sensor


Infrared pass filters can be built by salvaging the disks from floppy disks. The material blocks most visible light and allows infrared light to pass through. This type of filter would be meant for a situation where it was desirable to only sense infrared light and not ambient light. In this case that was necessary so only infrared light emitted by the sensor is read and ambient light doesn’t affect it. A suitable receiver will be used. Currently the circuit used an inexpensive IR (infrared) LED as the receiver but it wasn’t necessary to have an emitter. Once the receiver is changed to only pass IR light an IR emitter will be necessary.

Modeling was done to create an emitter and receiver tube which would house two 5mm LEDs. Although one would be wired as a receiver and one would be wired as an emitter. 5mm LED holders were measured to ensure LEDs could be mounted securely. The purpose of the tubes was to direct light in a narrow beam while allowing reflected light to only be visible in a small area. 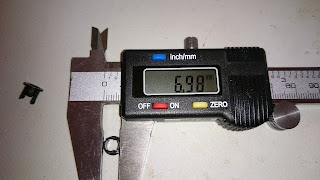