October 07, 2015
TSOP4856 IR receiver replaced the TSAL6100 IR diode to try to filter some of the noise. Since the receiver used a side-looking package the same mounting technique used to house a 5mm LED wouldn't work. Hot glue was used to hold the receiver in place. As seen in the second picture the new receiver used three wires unlike the previous component which used two. 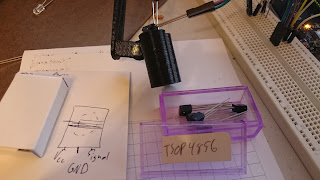 New receiver from side

New receiver from back

The TSOP4856 receiver kept the output pin high and lowered it when IR pulses were detected. This eliminated the need for pull-up resistors and also kept the controller informed while the component was connected. If the signal went low for too long, half of a second, the controller would assume the receiver was not giving usable input. Additionally the receiver was programmed to deliver pulses so a constant light source would not cause the device to constantly output a signal that it was receiving.  In security systems this could indicate tampering

Code was written to oscillate the emitter pin and monitor the controller's receiving pin. When the signals matched (pin states were actually opposite since the receiver output a LOW state when it saw IR light) an output went high. This ensured that noise would not be read as a false positive and there would be no output when no reflection was seen. A fixed number of corresponding reads were necessary to trigger the output. 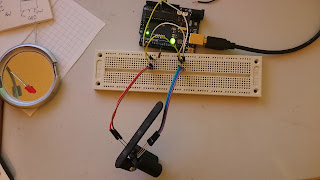 Code was not completed. Consistent reads were not happening so another day should be taken to ensure good reads are happening. As a homemade infrared proximity sensor this should be its own project.