October 08, 2015
An OpenSCAD module was written which produced a bar with a half circle on one or both ends and holes. Shapes such as this have been convenient before so the module should save time. This module will be distributed if it is used in the final design.

A mounting platform was modeled to hold the emitter and receiver tubes by rendering three rounded bars. For a base a flat bar with two rounded ends was modeled at the origin [0, 0, 0]. Two smaller bars were modeled to form a slot where the emitter and receiver tubes could be placed and held on both sides. Holes were made in the vertical pieces to match with the hole in the tubes.

A print was made and allowed to cool. Two nylon washers were placed on either side of the tab on the emitter/receiver tube and a bolt was placed through all three holes to make a hinge. The purpose is to be able to adjust the line of sight, LoS, so a precise threshold could be tuned when using the proximity switch. 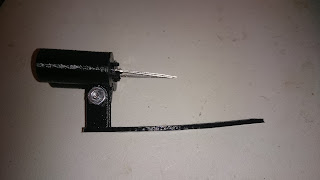 Wearing the device was simple. The long base was modeled so it could be slid under a watch band, wrist band, sweat band, bracelet, bracer, or similar wrist-worn accessory. If a sweat band, or similar cloth, was used Velcro could be used between the base and wrist band to keep it steady. In the photo a wrist-worn fitness tracker was used. 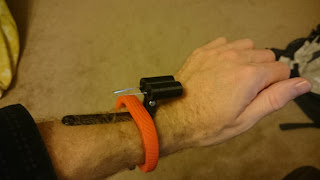