November 28, 2015
The new keyboard project kept moving along nicely. Since many of the hiccups(hiccoughs) encountered with the Wrist Mounted Chording Keyboard were already solved the desktop version has been going well. The layer of polyurethane was dried so the finger switches could be assembled. Decorative brass washers were placed around each key. The washers were important for reducing friction but the brass was to match the aesthetic of the wooden keyboard. 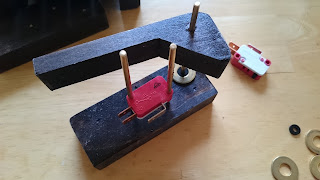 Keyboard being assembled with brass washers

To help the looks of the keyboard brass corner guards were also used. These were not necessary but the look comes together better in my opinion. 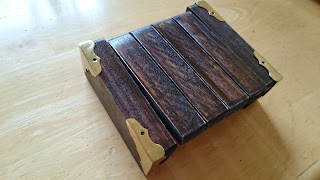 Wiring for the keys was salvaged Ethernet wire with 0.25" quick disconnect terminals. Each key had a specific wire and the ground signal was carried on a single wire which branched out to each switch. the color code was the same that was used in the Wrist Mounted Chording Keyboard. 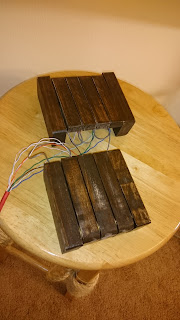 A wooden base was cut which would be large enough to fit each of the key components with an inch on each side. Ordinary wood, probably poplar, was used. This wood was inexpensive but finding a length with no imperfections was easy. 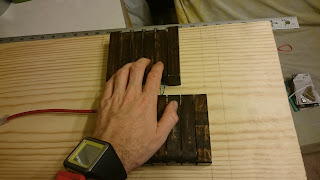 Keys on base with one inch border

While working on the wooden version I decided it would also be convenient for some people to have a 3D printable version which operated like the wooden version but could be produced quickly and with no more tools than a 3D printer and a screwdriver. A model was made which would hold the bolts and brass rods, similar to the wooden version. A parametric model was made which has a parameter to change the angle at which the keys sit. The goal was to make a keyboard which would rest comfortably under the hand and not require the hand to be splayed the same way as a traditional keyboard. 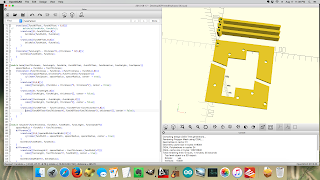 A print was made for the thumb switches and the finger switches so seven keys and four base pieces were printed. Two base pieces were needed for each of the switch sets. The holes were modeled to accept 1/8" (3.5mm) brass rods and #6 (3.5mm) bolts. 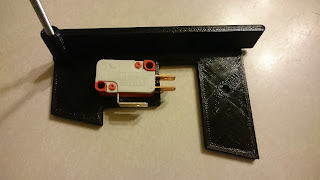 One switch, one base piece, one key, and a bolt

Assembly went smoothly. Bolts and nuts were placed through the holes to the outside and brass rods held the switches in place. The structure was solid but considerably lighter than the wooden version. 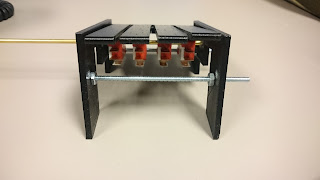 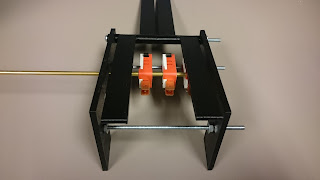 Both finger keys and thumb keys were assembled to make a full keyboard. It turns out that the angle didn't make a difference regarding how much the hand was splayed while typing. Unfortunately this does nothing for the ergonomics of the keyboard but it does mean that the keyboard can be printed with minimal plastic. 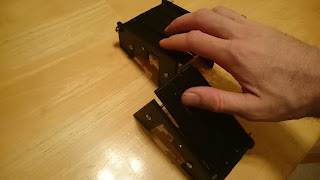 Holding hands on the full keyboard