December 26, 2015
This was a busy week for the haptic compass. Lots of revisions but I also feel like it has been a productive week. A second option was explored right after last week's summary. Instead of a flat compass like you would find in a hiker's breast pocket this was based on a spherical compass you would find hanging off a zipper pull or suction cupped to a car dashboard. The simple premise was that this model would be suspended in a liquid and then weighted for neutral buoyancy. Embedded  magnets would cause the spiney/finned ball to point north and a small pin on the enclosure would cause collisions when the wearer was pointed north. These collisions should be felt by wearers to alert them they are facing north. This model has not been given much work aside from a rendering. The rest of the work this week was done on the cylindrical model. Although that model is looking more spherical by the day.

The rest of the week was spent modeling, printing, and testing the cylindrical version. Without going into detail, which can all be found in the daily posts, the spinner was the focus of the week. The goal was a spinner with a specially shaped socket and a base with a corresponding shaped post. When the spinner faced the desired direction, north, the spinner could rock back and forth with a lot of freedom. If the spinner was facing any other direction that rocking motion would be extremely limited. This rocking motion should be a huge factor in making a haptic compass.

Advanced model of the cylindrical spinner

There were all kinds of problems with the program I was writing in OpenSCAD. Printer tolerances were not applied correctly. Measurements were not used uniformly. Scaling would occur in one place and not another so pieces would bind up or fit too loosely. The biggest problem was the junction of the post and the spinner. This was meant to be a precise joint with tight tolerances. Instead it was sloppy and the pieces refused to fit. A test base was printed in the hopes of finding a base piece which would interact properly with the spinner. Four different posts were printed, each was printed with larger dimensions than all the bases printed before. This test base was not meant to be part of the final product, only a way to see what was necessary and test the usability of the design.

A video was shot of a successful test which proved the compass could be designed to rock back and forth when facing a particular direction but not when it facing another direction. This has been the hardest part of this project and is what caused this project to fall on its face months ago. So, no matter what happens, this hasn't been fruitless.

With the success shown in the video I tried to put a groove in the bottom of the spinner so a metal bump could be installed in the base. This would have been a brass screw. The metal bump would collide with the metal magnets when the spinner and base both faced north. Spaghetti code finally caught up with me because the base and spinner did not act the same way they did in the video even though they should have been exactly the same. Tolerances between the post and spinner allowed the spinner to freely rotate but it would not rock back and forth when facing north.

Base with hole to insert metal bump 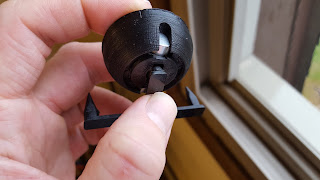 Unusable tolerance between spinner and the test base

During a day I didn't have to work I started a new OpenSCAD program from line one. All new code was written with the mental image of what the spinner SHOULD look like instead of patching together more spaghetti code. The result was 25% shorter and easier to follow. All measurements were based on the idea that the origin (0,0,0) was the pivot point so making an animation where a cutaway section of the spinner rotated around the base was easy.