March 26, 2016
Last week started with a move. I left my lonely two bedroom apartment to mix kitchen appliances with my girlfriend in the top floor of a two-bedroom duplex. Before I lived in a suburb that was uneventful and nothing was really in walking distance. It was so boring. My girlfriend knows the cities and found us a lively area which is close to an adorable corner-store attached to a little hardware store. It has a small town feel except that it is not isolated. I probably sound like I’m writing for a realtor right now but let’s just say that I am excited to live here.

Most of the STUFF moved into the new place

Months and months ago, last year actually, I started a drip coffee machine. I thought drip coffee would be a neat experiment since I had had good luck with cold-press coffee. Coming up with a concrete design was not easy and that was the reason I didn’t start publishing it months ago. But, it picked up so I’m publishing blogs about it since I’ve finally nailed down a design I’m excited about. In the beginning I wanted it to look Victorian and I think I managed to keep that aesthetic a little. It’s not overwrought and I didn’t just glue some gears to it. Most of my work is utilitarian but this was meant to look nice. I didn’t want visible hardware like nuts and bolts and I wanted a dark stain for the wood. The project started with a glass container, a rose bowl, which is meant to be a water reservoir to slowly drip water onto coffee grounds. A brass valve and rubber stopper were added to the top of the container to hold the water inside when it is filed and flipped over. 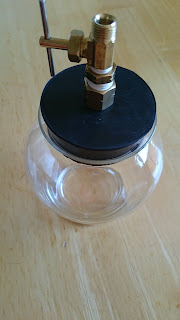 Since the needle valve used at the bottom only allows a tiny amount of fluid to pass it won’t allow water to drip out so a breather tube was added. This tube, made of brass like the valve, simply allows air to flow to the top of the container while it’s draining. So long as the water level isn’t covering the breather tube no water should escape that way. 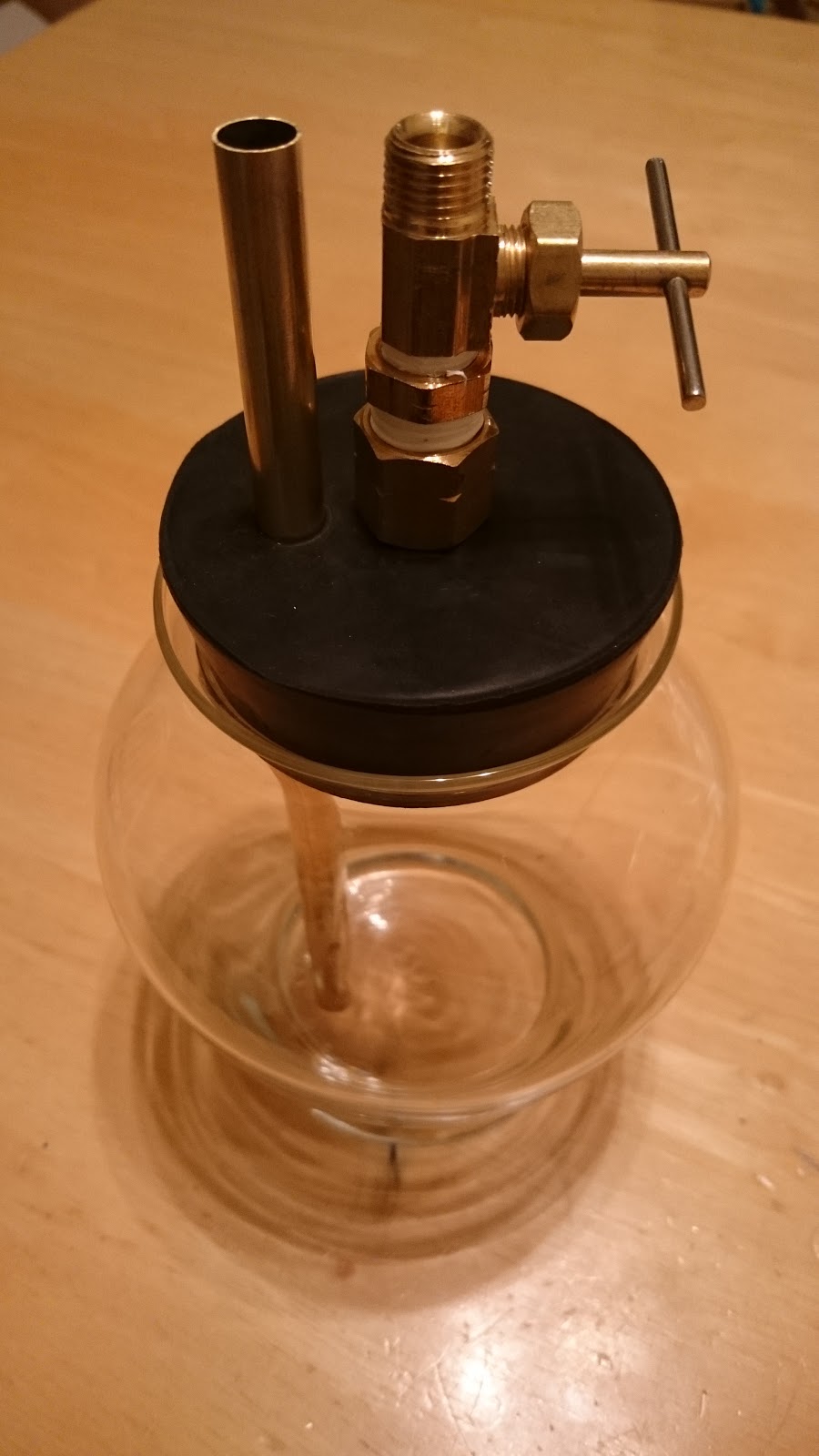 The water reservoir wasn’t difficult, despite being more complex, the difficulty was finding a something to hold the coffee grounds while water dripped onto them. Different considerations needed to be taken for a coffee holder, like a filter. It needs to be easy to remove the used grounds and filters must be replaceable. These factors lead to a lot of wandering in hardware stores looking for something suitable. A copper pipe coupler, some O-rings and a PVC adapter were my desperate attempt. Do not buy these materials, they didn’t work for me and only threw a wrench (spanner) in the works and halted this project for months. 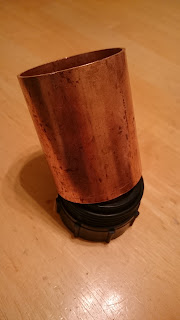 After months of secret hiatus I had a new idea for the coffee maker. I set to work after buying a nice looking consumer-grade coffee pour-over coffee maker. Instead of trying to copy a design I had seen before which looked like pretty lab equipment I finally shook off the preconceptions and designed from scratch. Sometimes climbing out of the box is harder than the actual work; it was this time. I was able to maintain the look I wanted but the design and building changed dramatically. The water reservoir was also kept but the coffee holder was scrapped. 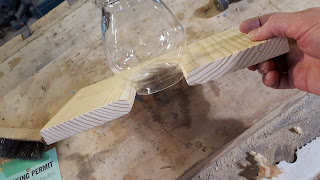 A conceptual drawing was sketched on graph paper and can be seen next to the wood cut for the two platforms. Instead of looking like lab equipment where each part of the maker was held on a stem this will use two platforms to hold a pour-over below the water reservoir. The platforms were cut from stocked 2x12 lumber. The drawing has a hexagon which was supposed to be a mirror. 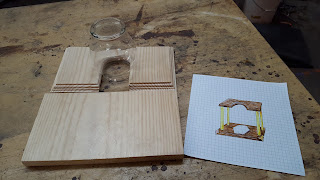 Separating the platforms would normally be an easy task but with aesthetics being so important the obvious choices were too unsightly. This lead to another bout of wandering around a hardware store and touching everything. Finally a solution presented itself with the available parts. To keep the bolts out of sight the top platform would use bolt sockets which could be installed from one side. Normally bolts go all the way through an item and fasten on the far side. 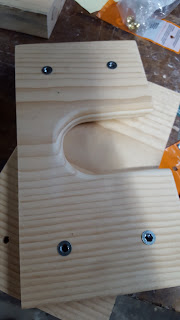 Supports for the upper platform were going to be 1/4-20 bolts but they were covered in brass tubes since the hardware store stocked those parts. Originally I had wanted to use copper pipe, which would have been much larger and less expensive, but the pipe had printing on the side so brass was used. Pipes and threaded rod were cut to precise lengths to make the supports going between the platforms. 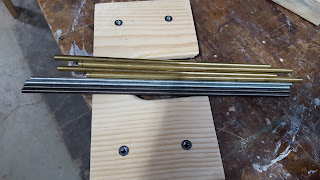 Tubes and bolts cut to length