April 23, 2016
Recording moved along this week. It started well by wrapping up the first part. The first part was five chapters long and was relatively self-contained. This is also known as the Zombie Story. These five chapters introduce the Charged world, although the word Charged hasn’t been used and that was intentional. The Zombie Story takes place before anyone has been publically revealed as having super powers and introduces the Ide family. This family share an unusual secret , firstly, they have super abilities and secondly, they inherited their powers from their mother. Inherited powers aren’t as common as people given them in a seemingly random lottery.

A friend of mine, Sarah White, has been putting ideas together for illustrating the Zombie Story so I wanted to edit the story which I’ve mentioned was the reason I started reading it. Only the first part of the story was supposed to get the audiobook treatment but it has become an enjoyable part of this project and the text has improved with the editing. Editing and recording continued with chapter six, which took place four years after the Zombie Story. It was still about the Ide family and Dawson, the oldest son, was still the protagonist. Recording equipment has been accumulating and it was supposed to be implemented after Chapter 05 but recording just continued with the equipment.

A whole day was spent creating a new recording space in a closet instead of the free-standing fort around the computer. The space had egg crate foam, also called convoluted foam, on three of the walls at head level. This uneven surface does a good job of dampening sound since sound reflects well off smooth surfaces, like hardwood floors and bare walls. 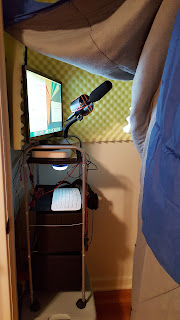 With the upgraded recording area it seemed like a good time to implement the new recording equipment. This turned out to be a disaster because the Windows-based PC wouldn’t repeat audio back to the headphones quickly which created a delay. This delay was very distracting since I was supposed to be concentrating on my voice to make sure I sounded reasonable. Fortunately it was possible to continue using the Mac with Garageband. This software has been easy to use so far. 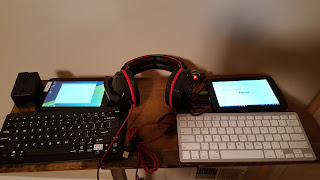 Nice looking but not useful for recording

Chapter seven recording was the first chapter to be recorded in the new space and it was uncomfortable. Uncomfortable is a soft word. Getting into the space was difficult since I had to duck under a hanging sleeping bag then stand behind a plastic bin on the floor which had a small cart on top to hold the computer. I could not stand close to the computer so typing was difficult. I couldn’t even bend down because the cart was in the way so when I dropped something it was a procedure to pick it up. Lighting in the closet was provided by a magnetic LED puck which was enough to see the keyboard but did not promote a healthy work space. This will need some upgrading. The sound dampening of the room has ultimately been valuable enough to justify the change but there is room for improvement.