April 27, 2016
Discomfort in the recording space was becoming problematic. Recording sessions were short, tiresome and easily distracted for any reason to leave the space. Designs for a shelf had been developing for several days, mostly while inside the space. Other shelves were needed for the new place so a day would be needed to cut all the necessary shelves for the apartment and one specialized for the recording space.

Earlier the plan was to purchase 1x12 lumber, cut it to length, paint it and wait for it to dry before installing it. In order to start recording immediately a second custom shelf was going to be purchased and left unpainted so it could be used immediately while the other dried. My girlfriend however made the suggestion to simply buy shelving planks which came with Formica or faux wood covering and didn’t need paint. I listened to her.

Enough shelving planks were purchased for the whole apartment and one thicker piece which would become the custom shelf in the recording space. Scrap lumber was found at the hack space which would act as a long brace which would have to span the length of the closet and a second piece to elevate the rest of the computer shelf. 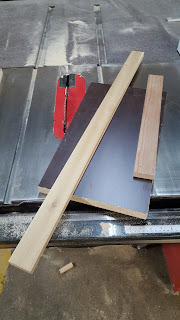 The wood was cut to length and assembled in the dimensions of the closet. The whole unit was assembled upside-down so screws could go from the bottom and remain unseen while the shelf was being used. Unfortunately the long brace was installed on the wrong side. If the shelf were to be installed this way the brace would block the door or the shelf would be on the wrong side of the recording space. 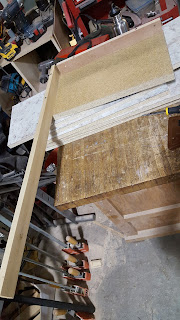 Corrections were made so the shelf would sit in the recording space properly. Wood on the back of the shelf, which was meant to elevate it, was trimmed at one corner to make room for the brace. A miter hand saw was used rather than a power tool which would have taken more time to set up than a hand saw. 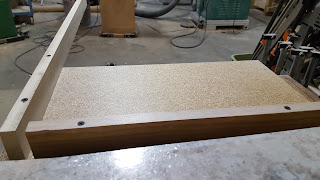 The shelf was installed in the recording space. Dimensions were tight and it took almost five minutes to get the shelf installed properly but it felt very secure instead of wobbly. Height of the shelf was determined by existing shelf brackets and one was a suitable height for a standing desk. 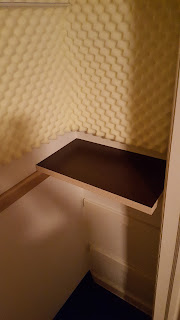 Computer equipment and recording equipment was put back in the closet. The computer screen didn’t fit on the shelf but tension between the padded walls was enough to suspend it over the desk without any other support. In the picture below there was no stand on the computer monitor since it was removed for this setup. An LED light, previously used on for the Acetone Vapor Bath Experiment, was added to the space. LED lighting shouldn’t add excessive heat, which is why it was used in the acetone experiment, and shouldn’t add any noise to the recording unlike fluorescent which was known for adding a buzz. 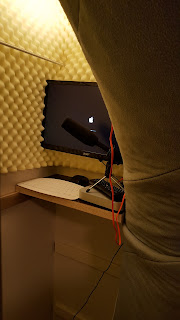