May 28, 2016
Last week’s summary failed to include the Firefly Tattoo I had installed. Safety precautions were shown in the blog post so if you’re concerned for my safety, thank you and please read the full post if you continue to be concerned. I’ve had it installed more than a week now and healing has been perfect. The stitch was removed and a lot more light is visible. At first it was only visible in a completely dark room and it took time before my eyes could adjust. Now it is visible in a dark room, not pitch black, and when my eyes are completely adjusted the light cast can actually be seen reflected on nearby objects. Of course it isn’t bright enough to keep me awake but in the dark my hand is always visible to me. 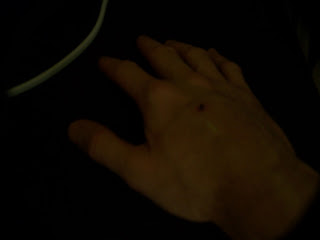 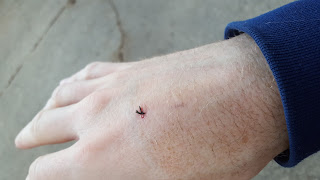 Stitch in hand right after implant

The week was full of recording. Eleven chapters were recorded! That is definitely a record for me. With chapters released each day it’s almost like a radio serial. If you have enjoyed it this way I am sorry to report that the flow will be interrupted for a new project soon. I’ve been hinting at a new project and it won’t be officially released right away but there is definitely a new project on the horizon. This project is another one which involves the recording equipment.

Some of the new chapters have been very short. Some were so short that during the editing I combined them into a regular chapter. This didn’t affect the story and probably helped the flow. Even though some chapters have been short the time necessary to record hasn’t decreased much. It still takes roughly three times longer to record than the actual output. A couple seven minute chapters can take forty five minutes to record. And those forty five minutes are tough.

Equipment in the recording space has been getting upgrades for a while now. Most of them haven’t been worth mentioning like a new pop filter or mic stand but the microphone and USB adapter used for most of the book was replaced and sounded so close to the first one that it wasn’t worth mentioning. The new microphone isn’t as finicky when I turn my head so volume consistency isn’t as much of a problem. The recording should sound better without a change in my voice.

A fun trick was tried on the last chapter of part one. The majority of the chapter was text message conversation between two male characters. Until this point their voices were distinguished by cadence and subtle intonations. Instead of repeating this while the characters were not actually speaking to one another the character not in the room was filtered through a “TELEPHONE” software filter which stripped the sound of low tones and made it sound as though the audio was recorded through a telephone. The effect was good and can hopefully be utilized later.