July 10, 2016
Binaural recordings are like surround sound you can only hear through headphones. Instead of placing speakers around a room and pushing sound through a specific one binaural emulates what a person would hear through their own ears and only needs two speakers but they have to be right on your ears.

Binaural differs from traditional stereo by recording or processing sound as it is actually heard by ears. Sound originating from one side our head takes longer to get to the far ear and may echo slightly or get additional distortion during that travel. We are accustomed to hearing this way and process it as three-dimensional sound when we hear it played back.

Stereo microphones are common and give a better spatial sense than a single microphone but they are not truly binaural. Binaural microphones should be set apart approximately the width of a human head. Even better, they should be contained in a shell which resembles a human ear. If you can make a couple silicone casts of ears you’ll be doing very well. Making a mold and casting can be messy laborious work and a 3d printer will do an acceptable job without the mess.

After moving to my new home the 3d printer hadn’t been plugged in, in fact most of the time was going to the Charged audiobook. It needed to be recalibrated which took less time than the previous calibration.

Two ears were printed with the Thingiverse files by Addamay123 . These ears were made in Sculptris but seem to be anatomically sufficient. The download provided two mirrored models although most printer software should allow mirroring of a single object. 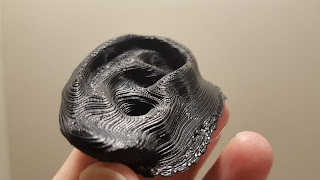 3d print of the right ear

A pair of line-level microphones were purchased locally. These microphones could be found online easily. They were sold as additions to security cameras and feature a pre-amp built into each microphone.

The components were connected to an Andrea stereo input USB sound card. This sound card ran without additional drivers and was meant for binaural recording. It was purchased with binaural headphones which have a microphone in each earbud and use the wearer’s ears and head as the apparatus for creating the perfect binaural recording. Inexpensive USB sound cards were also connected but they did a poor job of separating the left and right channels. Some computer sound cards also feature stereo input. If recording is to be done on a computer which doesn’t have stereo input this bundle is a good place to find an inexpensive stereo input. It will also integrate nicely with the latest Android operating system which is wonderful for portable recording. 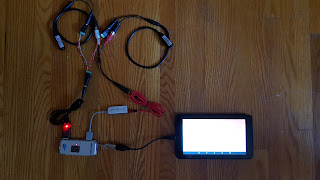 Quality from the mics and adapters was low and did not provide good signal differentiation between left and right channels. This may have been due to the splitter used to separate the channels or the pre-amps in the microphones. New Microphones were ordered to test the equipment.