July 17, 2016
Tolerances on the print were not tight enough simply slide a captive bolt into place so the holes were all drilled with a 3/16" (5mm) drill bit then tapped with a 1/4-20 tap. The 1/4-20 tap doesn't need a metric conversion since it is the standard camera adapter. 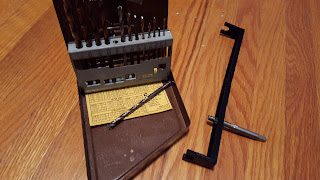 Drill index and tap going through the printed microphone holder

A 1/4-20 nut but forced into place using a long bolt as a handle. The loose printing tolerances made for a tight fit which is a good feature in this case. Instead of having to glue the nut in place friction will keep it steady. The hole below it was also tapped to 1/4-20 but it could have been drilled out so a tripod bolt could reach the nut. 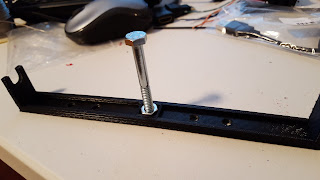 Plastic adhesive was applied to the end face and the arc of the microphone holder. These surfaces will be touching the ear-shaped microphones. No modifications to these surfaces was necessary but it might have been wise to sand the outermost edge so it would have a flat surface. 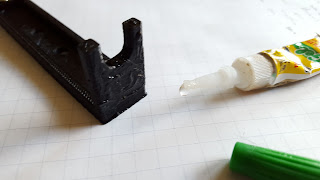 Glue applied to arc and face

Ear-shaped microphones and the holder were held in place by hand until the bond was set. The glue was allowed to cure for ten minutes. 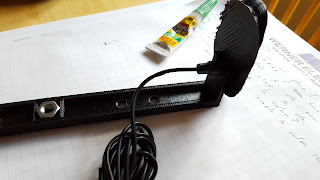 Microphone holder and left ear from the inside 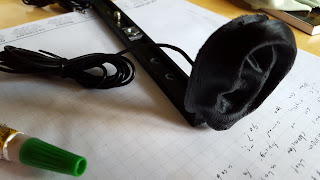 Microphone holder and left ear from the outside

Both ears were given time to cure. A captive nut was put in place at the hole closest to the center of the microphone holder. Four holes were modeled into the holder each of them a different distance from the center. The purpose of the holes was to provide different options for adding a tripod mountable device like a camera or camera adapter for a phone. 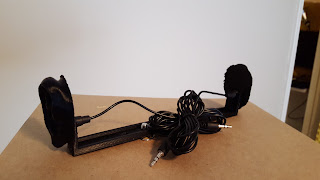 A tablet computer and tablet tripod adapter were added to the microphone holder. A mobile phone can also be attached the same way but the phone was prone to putting interfering EM waves from the NFC and wifi antennas. These had to be turned off for recording so airplane mode was the safest bet to ensure no radio waves were being broadcasted.

Microphone holder with tablet installed on a tripod

One new binaural audio file was uploaded called "Microphone holder test and EM interference" and can be found below with the rest of the recordings. The recording was a street corner while standing under an awning during a light rain shower. During the three and a half minutes the rain slowed and stopped until there was only dripping. Cars pass by. It was supposed to be a pleasant soundscape but the problem of the EM interference is apparent. Shielding may be necessary.