July 18, 2016
Binaural audio does a good job of replicating sounds but without video it might not make a lot of sense. Most people rely heavily on their eyes to make sense of their surroundings and I’ve talked about this before with the haptic distance sensors.

Camcorders, such as a GoPro or a more traditional version, accept stereo audio microphones as the standard. As of July 2016 Android cell phones however were not robust enough to accept stereo inputs even when the sound card was accepted by the operating system. The stock recording app in Windows 10 also failed this test. An audio recording app running on Android also kept the camcorder app from running properly. The easiest solution was to record audio in Audacity while recording video in the stock Windows camcorder app. This combination didn’t have the same hang-up as Android.

Video from the Windows tablet was low-quality due to the cheap camera used. The same configuration demonstrated yesterday was used so the system was self-contained rather than recording audio on one device and video on another. Ideally a dedicated camcorder would have been used. 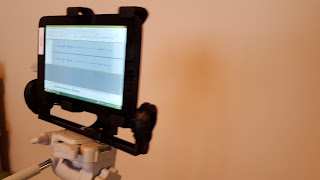