October 01, 2016
I noticed a problem with the release dates of 2 Cyborgs and a Microphone. They were one session off. The descriptions I was making were actually for the previous episode, thankfully someone was kind enough to point this out. Next week a new episode will still be released but it will be the one I talked about last week. In other words, I'll be all caught up in seven days. So, free sneak peek! Likely, I'll do another summary that day.

I'm the maniacal looking one on the left

Significant work was done on the Clockwork Theremin over the last two weeks. This is really becoming a mixed media project. There has been 3D printing, woodwork, electronics, and programming.

One 3D printed part was done for aesthetics rather than practicality. It was also a ridiculously easy part to model so maybe it was practical. On the operator's enclosure this part fills in between two flat panels where it would otherwise have been necessary to cut a couple angles. 3D printing this part allowed for some decoration in a panel that would otherwise have been unused. 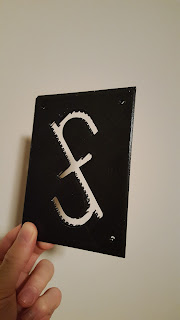 Cutting teeth out of the large plastic gears was tedious work but it was also cathartic at time. A rickety band saw was used at first but it was slow, dangerous and older than my mother. The shallow throat of the saw would also make it impossible to make all of the cuts. A handheld jigsaw and a 21tpi (fine toothed) blade was used and instead of cutting fifty teeth in a day it was possible to cut over three times that. 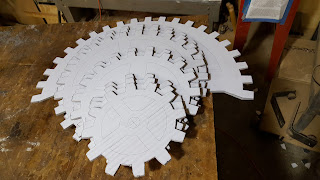 The second largest gear was too large to fit on the plastic sheets I had been using. It was over half a meter across so a piece of hardboard was purchased which could fit the print. The print was applied like the ones for the plastic gears by spraying the backside with Super77 then pressing it into place. 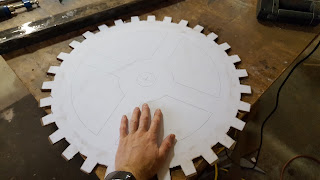 The largest gear with my hand for reference

Testing for the theremin is still a while off so the gears, which were already modeled, were printed at a small scale. These gears made a couple things clear. The smallest gears had the wrong number of teeth and the motor would have trouble driving a large gear before it was stepped down. 3D printing probably saved me a lot of time. The scale model also allowed me to learn the operation of an H-bridge.

When I start a project I often forget to give people the big picture, I just start on details. This is commonly known as a Bottom-Up approach. Some of the time this is great while sometimes it's better to use a Top-Down approach and start with the big picture. Starting with the big picture should have been a step at the beginning so I could describe what was going to be built. I made a cutesy graphic that shows how the gears should move in relation to the user's hands. These movements will change the sound from the Theremin. It was also fun to animate.

Gear ratio to this point has been a guessing game. The scale model made it clear that it wasn't going to have enough power. A couple options were available but I chose to go with a internal ring gear which will be mounted under the powered gear. A smaller gear will be placed on the motor and drive everything from there. The gears to go on the motor were small and this is still a guessing game so there were printed. Gears for this set were copied from Thingiverse rather than modeled from scratch like the rest of the gears on this site. The author was credited on the page that day. 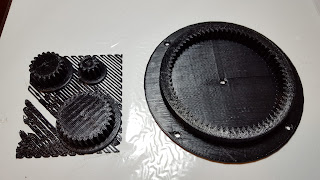 Even though the large gears have been carefully cut, and eventually they'll be carefully sanded, they may not be perfect. Imperfect gears do not meet up well and this was painfully obvious on the scaled gears. To combat this problem an OpenSCAD program was written which would allow spoked hubs to be printed with various parameters. This hub will allow bearings to be inserted, vary the number of spokes, change the diameter and a few other variables. This program has been made freely available on the page or any of the Clockwork Theremin pages. Curved spokes should provide spring action so the gears can be pressed against each other slightly. This will add friction but should prevent slipping. With the way the program works, slipped gears will automatically correct themselves.

Sanding between the gear teeth has been difficult. An expensive Dremel sanding tool was destroyed in a couple days of use. Several tools at the hack space were used without success. The most useful tool to date has been a piece of scrap wood with sandpaper held on with an office supply clip. Sanding has been the bane of this project. 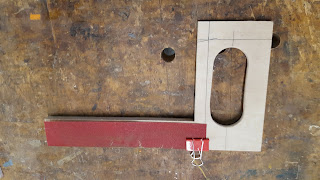