November 14, 2016
Mending braces were purchased to connect the motor directly to the gear. The higher torque and lower revolutionary speed of this motor should allow it to drive the first gear directly. The motor shaft was not long enough to extend through the gear so the metal brace should give it enough strength. Screws to attach the mending brace to the gear were longer than the gear was thick. To keep the screws from protruding dangerously, a wooden disc was cut from solid wood, not plywood. 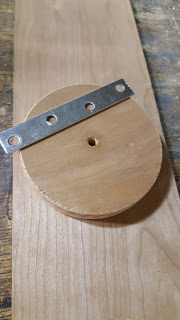 A central hole in the mending brace was necessary for the motor to attach. This hole was drilled to the size of the motor shaft as close to center as possible. Mending braces seldom have a pre-drilled hole in the center which was advantageous for this instance. 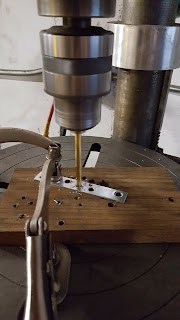 While making the motor attachment parts, a second set was made for the uncompleted second gear board. This wooden disc and mending brace were prepared exactly the same since the second motor was identical. 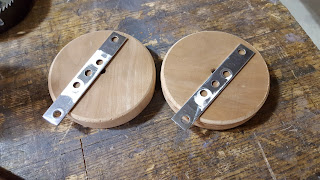 Discs and braces for both gears

Ordinary countersunk screws were used to attach the mending brace to the gear face and the wooden disc was used as a receiver for the long screws. Alternatively, countersunk bolts could have been used but it may have looked odd since the gears use seven teeth and the screws would have been asymmetrical. 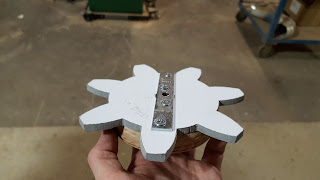 A large hole was drilled through the wooden disc and gear so a nut driver could reach down and tighten a nut onto the motor shaft. After that, it was a simple task to attach the upgraded gear to the motor. When it was in place it could be seen that the motor spun fluidly with the gear in place. 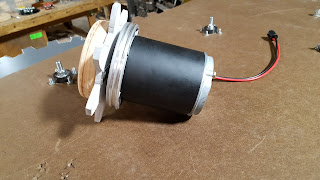