December 05, 2016
Yesterday's Arduino sketch was uploaded to a generic UNO board which was on hand. Since the program was so simple it would be no trouble to upload the same sketch to any board with enough pins. If PWM wasn’t capable on the output pins it would be a simple matter to rearrange them to match any board from a Pro Mini to a MEGA. A simple circuit was connected on a breadboard with a couple buttons and a couple LEDs. 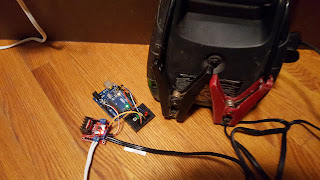 For the purpose of a demonstration, LEDs were connected to the outputs. These simply demonstrated that the outputs were using an increasing duty cycle. This was narrated in the video as well. Each button outputs to the LED next to it, one red and one green.

A second video was taken and narrated. This video demonstrated the change in duty cycle on a digital multi-meter. The readings gradually increase and the bar graph at the bottom of the screen increase proportionally too.

Experimenting with the program lead to some discoveries about the motor and H-bridge interaction. When a low duty cycle was applied there was no movement but the motor would make a high-pitched tone that increased in volume as the duty cycle increased. When enough power was delivered the tone would stop and the motor would turn silently. Presumably, this tone was a product of the PWM. Since moving the motor was more than a simple matter of applying a duty cycle from 0 to 100 percent, more experiments will have to be run with the Arduino sketch. Several questions will have to be asked and answered so that an effective program can be written to control the gear boards.