December 19, 2016
Roughly two years ago work on the Color/Touch stopped. Scope-creep ultimately put this project into a tailspin. Adding sound was a headache which should have been a simple addition but doubled the programming work and quadrupled the electronics. It has been removed for this version. LED mounting was a hassle. LEDs were being held to the back board with hot glue and stiff wire. The stiff wire didn’t hold things in place, it pried them off the board.

Removing sound was the first step to restarting the project. The next jolt was the idea of replacing the glued-on LEDs with LED strips. Individually addressable LED strips were not cheap, even when ordered from China without express shipping. Regardless, a five meter strip was ordered months ago when the idea struck.

Restarting hasn’t been a fast process.

Power to each of the LED strips will be run to the center of each strip. This will ensure the shortest amount of wire between LEDs and the source on average. If the strips were hooked end-to-end or kept as a single strip the LEDs toward the end could suffer from low power. 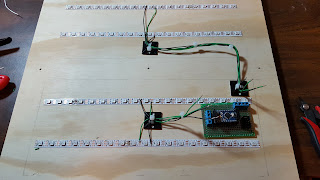 Power wires and control board

A control board was started which would hold the controller and all the components with which it communicates. The necessary components were soldered to the board but none of them were connected. Screw terminals for all the LED power wires were added. A 2x6 header was attached for connection to the frame-mounted switches. Two rows of header sockets were connected to receive the controller, an Arduino Pro Mini. 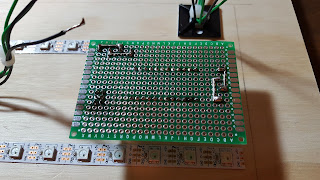