December 22, 2016
Changes to the hardware meant changes to the software. Since the number of LEDs was more than quadrupled, the code needed some alterations. When it was written, the number of LEDs was nearly set in stone so some of the numbers were hard coded into many places. Places where the code explicitly referred to sixteen total LEDs or four LEDs per panel were changed. Four panels is likely going to be the most ever built into a single Color/Touch.

In the old code the LEDs went sequentially through the panels. In other words, all the LEDs were wired in a sequence so the addresses of each panel were in a row. This changed with the new hardware. A large matrix was written which calls out the address of each light associated with each panel. It could have been written as a mathematical function but it would have been awful. Using an even number of LEDs in each strip would have helped clean that up too. Perhaps in V3.0. 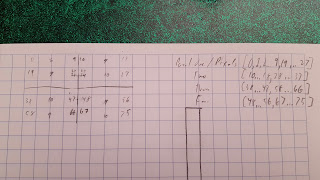 Matrix for figuring out the LED addresses


An issue with the switches resulted in unwanted behavior. There was a short between the reed switch, which controlled the mode, and one of the panel switches. When one switch was activated it simultaneously activated the other. The problem was that pressing a quadrant would change the mode instead of changing LED colors. A short sketch was written which simply reported when a button was pressed. A continuity meter determined that the short was on the control board and jagged wire insulation could be seen near the 2x3 header pins. The faulty wire was replaced and the short went away. Debugging can continue. 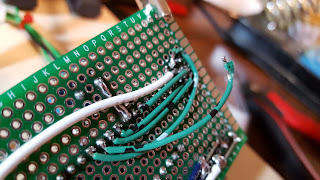