And hopefully after that.

This project was designed with withstand severe punishment for a long time. After that abuse the parts must be easy to replace. Pianos, even toy pianos, were not built to withstand the beating a musical therapy instrument takes. This piano cannot have sharp corners or rough surfaces. It cannot have anything that can be pried apart with bare hands. It must be capable of being dropped, kicked, and punched without failing or doing harm.

It must also be affordable and that means the whole thing cannot be made from 3D printed grade-5 titanium. Bummer. Since parts will eventually fail making them cheap to replace is also important. Not only cheap, but it must be possible for non-technical people to replace them. Ideally replacement parts could be shipped to people who could replace broken parts in a matter of minutes with nothing more than a screwdriver. Which could even be included with the replacement package. Modularity in this project will be important.

Years before this blog I made a few electronic guitars, three actually, my brother has the second model while I have the first and third. I am NOT a musician so I approach music as an engineer. I have some semblance of user experience tailoring but that is hardly my forte. When given the challenge of making a piano that could be played with a baseball bat I turned the idea around for over a year. Finally the idea was ready to be built.

The solution seemed obvious one morning as I woke up. Waking up on the weekends is like that some time. Making the piano was a matter of breaking it down into the smallest usable portion then replicating it over and over. Most products are designed to be built as a whole then produced over and over. This was a little different. Parts of it will be built identically, modularly, so they can be designed once, built repeatedly, and replaced easily. Each octave, 12 keys, will be separate from the octave(s) next to it. So, if a key is broken, the octave can be replaced instead of the whole piano. And, if each octave can be programmed to be any other octave a single spare can replace any broken octave.

One of the toughest parts of creating a piano is generating sound. No one wants to hear a piano day in and day out if it sounds like mechanical crickets. Well, someone somewhere does, but most people just want a piano. In musical therapy there’s no reason not to just make a piano that only makes piano sounds. There’s no need for an minor alto harmonica. I don’t know if that’s really a thing. The sound board in a cheap electronic piano seemed like the logical choice but that would be expensive and they’re pretty large. At that point I would only be building a tough skin for an existing product. All I needed was the synthesizer module. Professional synthesizer modules are not cheap, even flimsy ones.

I hunted around and found that Android can run a synthesizer fast enough to act as a piano. There was even a free app! The app was downloaded and connected to my electronic guitars. The plan for the piano was to connect each octave with its own MIDI controller to a central Android tablet. The app would launch automatically so it would not have to be exposed to damag. Even though it had a screen it would not have to be visible. A small tablet was easier to set up than a Raspberry Pi and still cheaper.

Two guitars were connected but the app would only recognize one at a time. Each guitar had a totally different style of controller. One used an Arduino Duemilanove with a DIN MIDI port running to a USB converter. The other used a Teensy which supported MIDI over USB. When either was attached alone they operated flawlessly but the Teensy would always take over. This lead me to believe that if they were going to place nicely together they would have to be the same type. 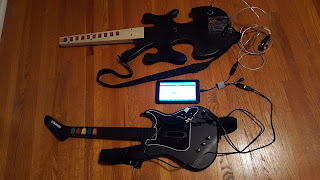 Guitars connected to an Android tablet