January 07, 2017
Episode sixteen was released last week. This one deviated from the usual cut-and-dry world of biohacking and went into the realm of fiction. Specifically cyborgs in science fiction. CbSciFi. We had a lot of fun recording the episode. One person said this was in his top two favorite episodes.

I have the pointier nose

Nearly two years ago a project was put on the back burner. The Color/Touch had a lot of problems with the design and implementation and the problems became overwhelming. Time away from the project turned out to be the best recipe because it was finished a few weeks after picking it back up. Not only that, but it was brighter and easier to build than the first version. The video below was created to show the final operation and innards of the device. It was narrated in a recording space then the audio was spliced into the final cut of the video. It is less than two minutes long.


Narrated video of the Color/Touch

To follow up the Color/Touch a piano was started. In truth, this project was started six months ago and never got any posts on the blog because it was a pipe dream at the time. Records were kept and a final design was reached. After six months. This project was also intended for child therapy, at least the non-medical hacker approximation of it. Most kids love making noise and music therapy is a powerful tool. Some kids get rough with their toys, even the ones they love. The premise of this project was, "A piano you can play with a baseball bat."

Like the Color/Touch it couldn't do any harm to a child no matter how much it was abused. After all the abuse it had to keep functioning. In addition this one also has inexpensive parts that are easy to source. So, even if this thing is beat to a pulp the parts can be swapped out in a hurry.

The sound generator could have been from a musical keyboard where the keys had been obliterated into non-existence and my cousin has produced a few of those. But that's not replaceable and it might not be an option for someone else. Raspberry Pi Zeros were chosen. Mostly because I wanted to immerse myself into some hardware Pi programming. 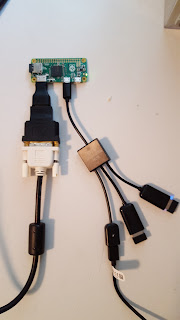 Raspberry Pi Zero with display, charging cable, mouse/keyboard and wifi. In that order L to R

A PiMoroni Piano Hat was purchased to find the finer points of creating a piano on a Pi. PiAno (pie-an-ohh). Once that was discovered the code was altered to ignore the serial data from the Piano Hat and simply look at GPIO points on the Pi. There would be a Pi for each octave and octaves would be replaceable for easy repairs. Each octave would have identical programming and a selector switch to tell the computer which octave it should emulate. This feature allowed easy replication of the programming and simple setup when replacing an octave. A short video demonstrates the notes playing during a start-up sequence.