January 11, 2017
Key shape and size seems to be continuously moving away from traditional keys. The first step away was making the keys line up with straight lines instead of evenly spaced like a regular piano. The second step was allowing them to be wider than regular keys. Since this was never intended to be a performance instrument this seemed acceptable.

2" (50mm) wide slabs of wood were cut from a piece of 2x8 lumber. This uniform length became the depth of each key which will be considerably deeper than any piano in regular production. Added depth allows for a 1/4" (6mm) hole to be drilled in the center without significantly weakening the key. 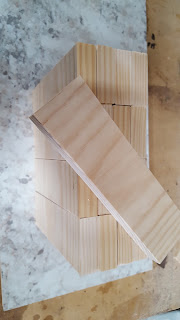 Some of the slabs were cut into short pieces so they could be glued to the sides of longer pieces and make a chunky "L" shape. This gap allows for a black key to be inserted later. Glued pieces were clamped for an hour to dry then allowed to dry for 24 hours without any excessive stress. 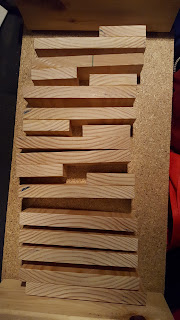 1/4" (6mm) holes were drilled into the keys. White keys, shown on the left, have the hole equidistant from each edge . Ideally these keys would be longer so gravity could return them to their regular position. This gravity return already works for the black keys. 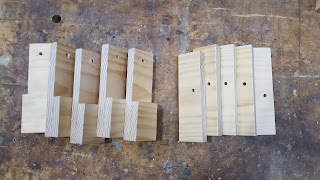 Holes drilled in each piece

Keys were not cut in the correct quantity but there were enough to set things up and get a feel for how the octave would look. One of the L-shaped keys had a piece of plywood added as a spacer so the whole assembly would be just one key short of an octave. Inside this wide key a 1/4-20 coupler nut was seated inside a large hole and bolts were inserted through the other keys. Since the black keys sat higher than the white keys they could be pressed as though they were already part of a piano.