January 22, 2017
An entire night of projecting was dedicated to debugging hardware problems with the PiAno. The first issue was that a note was played upon the release of a button. I had assumed this was a problem with the program, it was written awhile ago, and it was recognizing any change of state as a signal to play a note. If that were the case it would have been a relatively simple fix. In truth, it was even simpler than that but it's not really good news. The problem was the switches being used. Despite being high-quality switches, Cherry actually, there was a moment of chatter when they were released. All the switches currently installed came from on-hand stock and some of them were a different model which did not have the problem. Different switches were used and the problem disappeared so the issue was the switches. 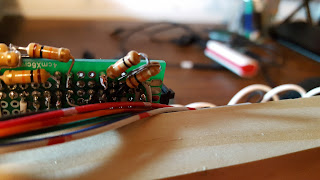