January 30, 2017
Raspberry Pi Zeros were installed in the Pi-ano. Wires from the data and power ports were routed around the arcade buttons and neatly tied up with tie blocks and zip ties. This type of wire fastening was learned from my years of industrial panel assembly. 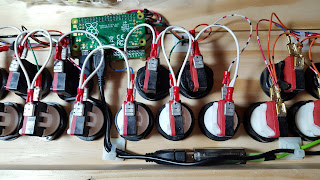 Each Pi was wired up the same way and wires were fastened as neatly as possible. No labels were put on any of the cords before installation. 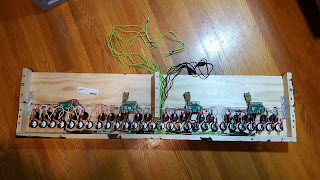 Naturally, there were unexpected problems. Considerable static was noticeable on the audio line and none of the Pis would boot. The whole system was being powered by a 1.5Amp supply running to an inexpensive USB hub. A meter showed that the power running to the system was less than it should have been so some of Pis were not getting enough current to operate. 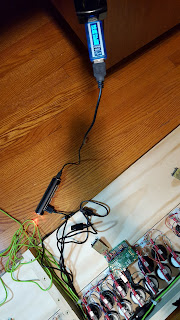 Meter used to measure current to the system

A replacement power supply was used. This supply used a coaxial connector to power the USB hub instead of running through the USB connector which may have been regulated. Two of the Pis booted and there was sound, still with static, but it was easy to see the difference an appropriate power supply made. Several tests were run on the Pis to see why they wouldn't output sound but it seemed to be a problem with the memory cards. When the cards were swapped from Pi to Pi, the problems followed to cards. The problematic cards were wiped and given a fresh install of the image. 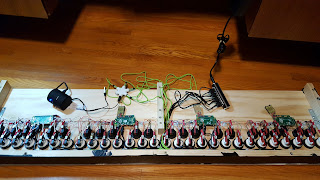