February 23, 2017
Another enclosure model was printed which increased the depth for the watch so the lid could close flush. In the previous model the thickness of the watch prevented the enclosure from fully closing, but just barely. Only the bottom half was changed to make it deeper. Only the bottom half was changed because it was responsible for pressing the button and pushing the watch deeper allowed the button to be pressed by the enclosure. 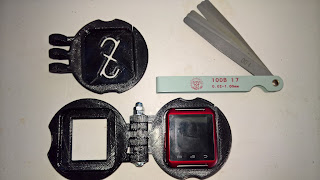 Spacing problems became evident when the watch button could not be pressed. The watch would slide to the left as the integrated hinge pressed the button but also pushed the watch out of the way. Rather than reducing the width of the watch’s footprint two small bumpers were added to make room for the silicone flap which covers the watch’s charging port. The width of the bumpers was measured with metric feeler gauges.

Another print fixed the measurement and bumper issues so the watch fit nicely without excessive force and was held in place by friction alone. The hinge moved easily so a bolt with a nylon insert nut was tightened until the resistance was able to let the hinge move easily but stay in place and stay shut. The thumb recesses modeled earlier made opening the enclosure very simple. 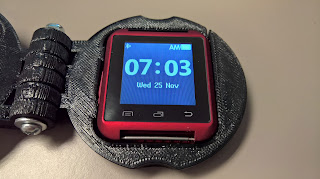 Making the bottom of the enclosure deeper made room above the watch for a plastic sheet to be inserted which will protect the screen from being scratched. The watch was not meant to be operated while the cover was closed. 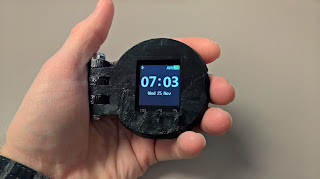 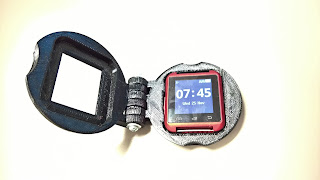 Downloads for Touch Screen Pocket Watch
To do: