March 12, 2017
Three years of 24Eng! Yesterday was the three-year marker for the start of the blog. On my 1,000th post, I made a big deal so I won't give this any more attention but you can check out all the things I completed in my third year.

24Eng is going strong Twin Cities Plus has not fared as well. TC+ was a non-profit set up to promote transhumanism in the Minneapolis & St. Paul area. Unfortunately, not enough people were willing to give their support so it has officially collapsed. TC+ brought Tim and me together to create 2 Cyborgs and a Microphone. Even though the company has failed, we'll keep broadcasting without it.

Variables across models needed to be kept consistent. At first, this was done by simply copying the variables from the first version and pasting them into the code for the second model. To eliminate the issues caused by variables not matching all the models were combined into a single file so variables could be changed in one place and it would affect all the models simultaneously. A new variable was added which would make it easy to change which model was being viewed or rendered. This variable was changed as the model rotate to show all of the models in sequence.

All the models spinning and switching

Flexibility was not a desirable feature in the tagger. It would have been possible to print the plastic very thick for added strength but metal would add that strength while adding some desirable weight. A heavy tagger shouldn't feel so much like a toy. A segment of the base was modeled around a metal bar to add that weight and support. 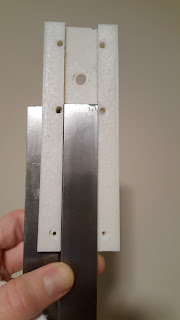 Making all the holes in various parts align with one another was easy once they were printed but when they were still in model space it was tricky. To help with that, all the parts were rearranged as they were meant to fit together. Since that approach was being taken, it was also easy to make an exploding animated view which I happened to think was pretty cool.

Once all the parts could be seen together the general impression was that the tagger would never be very sturdy. Brainstorming on that lead me to the old idea of using PVC pipes. Instead of just using short lengths of PVC for some of the tagger parts, I wanted to use a single large piece as the body of tagger. This had always been avoided in the past because attaching components, like buttons and switches, to a round pipe is difficult or impossible. With 3D printed parts it was relatively easy to conceive of parts that would allow a rugged PVC pipe to house all the electronics. 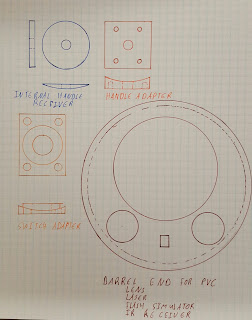 With the parts sketched and the idea in my mind it was a matter of a grueling marathon to model the necessary parts. Like the last tagger, the parts were modeled together like they would actually fit. A transparent PVC pipe was also modeled. In a single day, all the parts, except the forward array at the business end of the tagger, were modeled.