March 16, 2017
Pins for the inputs and outputs, I/O, were decided upon. For the first version of the tagger, there will only be two inputs and five outputs, not including the infrared communication. The trigger and reload button were the two inputs and lights were all the outputs. One will be a laser but that’s a negligible difference at this point. The I/O was decided by looking at a pinout diagram for the Pi and choosing general purpose input output, GPIO, near one another.

Hardware requirements will likely change when the usable devices are installed. The usable devices, like the report emulator (red LED) and flashlight (white LED), will require more power than the GPIO pins can provide so transistors will have to be added to control the power. The RGB LED at the rear of the tagger may not require extra power. If a screen is added in the future the RGB LED would likely disappear anyway.

A Pi GPIO breakout kit was purchased and attached to a breadboard. Header pins were soldered to the Raspberry Pi so it could be connected to the breakout board. It was not necessarily intended to be used with a Pi 0 since it relied on header pins. Two switches and five lights, three of which were contained in an RGB LED, were connected to the breadboard. Coding can start but will probably need some forethought as pseudo code. Testing code for the I/O may even come before that. 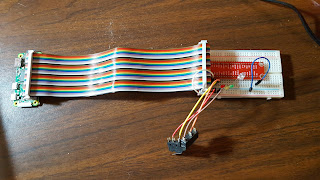 Pi 0 connected to a breadboard