March 28, 2017
Previous attempts to line up components on the topside and underside of a pipe have proven unreliable. One method to making the parts line up would be to modify existing parts in such a way that they went halfway around the pipe and included some method of aligning other parts. For example, it would be possible to design the trigger adapter and the reset button into a single model and once printed it would go all around the pipe. It could also be such a large part that it would couple the pipe together but this would require massive rework and take a lot of plastic to print.

Creating a simple and reusable part would be ideal since it would only have to be printed once and any number of taggers could be built using them.

The first concept, not pictured, was able to wrap exactly halfway around the pipe and it could provide flat surfaces to draw dividing lines. This was really nothing more than a C-shaped piece of plastic modeled specifically for the 2” pipe. Unfortunately, this wouldn’t help with making sure parts at one of the tagger aligned with parts on the other end.

The modeled design used two mirror-image models which go into the ends of the pipe and provide spurs. These spurs allow a straight-edge, usually a yardstick, to hold on the spurs and keep alignment while lines are drawn on the pipe. 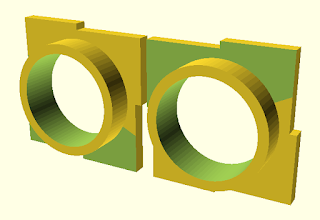 While modeling, it seemed logical to make it symmetrical on two axes so a pipe could be divided into four quadrants by incorporating four spurs. Aligning the parts in the ends of the pipe will be a matter of inserting them into the pipe and twisting them until they lay flat on a table.

It won’t be possible, with this model, to make a straight-edge touch at exactly the tangential point of the pipe on each side but as long as the straight-edge, even a cheap ruler, is used the same way on each quadrant it should line up better than anyone could detect without tools.