March 31, 2017
Yesterday's experiment using USB↔serial converters with LED transmitters and receivers worked about as well as expected. One of the issues seemed to be that the transmitting LED was constantly high. To counter this a NOT gate was constructed with a 2N3904 and some resistors. A NOT gate, also known as an inverter, outputs the opposite of the input signal, so HIGH signals become LOW and LOW signals become HIGH. 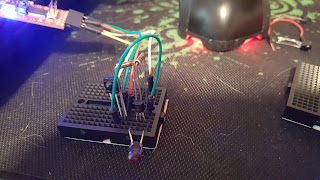 No glow on the LED so the NOT gate was working

Transmissions were still garbled while using a NOT gate on the emitter but there was still activity. Ordinary LEDs were attached to the breadboards to see the signals without the computers. This was not a good idea since it started the transmitter of power. To simplify, one computer was outfitted with only a transmitting LED and the other was outfitted with only an infrared receiver. 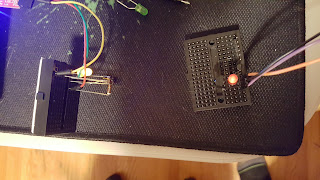 A NOT gate was also built on the receiving computer's side. The receiver's datasheet showed that there was an active LOW while receiving while a serial data connection expected an active HIGH. 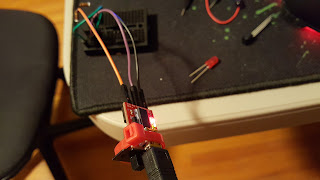 NOT gate built on the receiver

All data was still nonsense. Even long strings of data, which could conceivably start with a few bad bits, was all garbage.

A 17s video was taken to show what was happening with the hardware.