April 04, 2017
Rudimentary code was cobbled together from Arduino example code and Ken Shirriff's infrared remote library. Naturally, this failed. Code was stripped away, one line at a time, until there was just enough for an Arduino to receive and infrared remote signal and print it to the screen. In the animation below it's possible to see different buttons displaying codes on the screen.

Each button press corresponded to a code on the screen and that code could be displayed in different formats. The most logical way to display these codes, and Ken Shirriff's default, was hexadecimal. The basic code was modified so that each button press would display binary, hex, octal, and decimal. For those who are unfamiliar with this numbering, it is important to keep in mind that these are simply different ways of displaying the name information, they are all the same according to Arduino. It would be like writing a number in roman numerals, tally marks and 0-9. 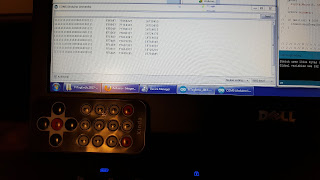 Once the codes were known it was easy enough to change the way they printed. Instead of portraying each button press as an unrelatable code, a string was printed which corresponded to the button being pressed. Pressing the button labled one used to print FF6897 but now it could print "1" and pressing the button labled OK would now print "OK". This processing will probably not be done in the Arduino but it was valuable to recognize how the coding worked.

A very simple remote was used for this example and they can be found at online retailers very inexpensively. Newer television remotes do not necessarily work as simply. The remote for my television sent three bursts for each press with the first and third burst being identical. Apple remotes send their serial number with each press so banks of computers don't interfere with one another. 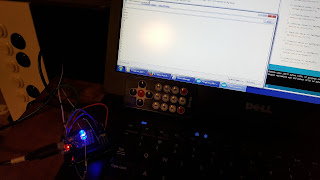 One LED was programmed to respond to a particular code: FFFFFF. This code was encountered when a button was held down. Remote receivers recognize this code as an instruction to repeat their last command. For example, if a user holds the button to increase volume on a television the volume level will increment as long as the button is held. The LED would toggle whenever it saw this FFFFFF repeat signal but it would not print anything to the screen.

Demonstrating and LED toggling upon the repeat signal