Tim and I have been doing a three-part series on human longevity, whether through medical or digital means. Our second episode was about the digitization of a human's personality. It is currently beyond our ability but it could be closer than the age of disco.

Focusing an infrared LED is what makes inexpensive laser tag possible. This tight, directed beam can be aimed and that directionality is what makes the difference between a tagger which can tag everyone in a room versus a realistic one which can tag a single target fifty meters away. To this point, the LED was going to be positioned by moving it along threaded rods then tightening it down with nuts when it was in position. It turned out this was a horrible idea and getting the nuts in exactly the right position before tightening them was impractical. Instead, spacers were printed. The focal length of the lens was 45mm so three spacers on a ring were printed which were each 15mm tall. When stacked, they formed a convenient tube with the outer rings serving to keep wires out of the path of the light.

Enough copies were printed for two taggers. If you look closely, there are unwanted remnants of plastic on the pieces, this is because my printer has been failing, hopefully, it's only a broken thermistor.  The rings had to be clipped away on one side to fit inside the tagger. 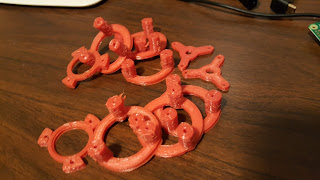 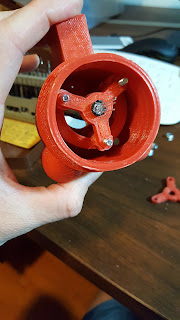 To start, a bright red LED was installed into the holder so it could be tested with visible light. This made it easy to photograph. At one meter, the light on the wall was visible as a distinct circle whereas a bare LED at that range would faintly shine red everywhere. 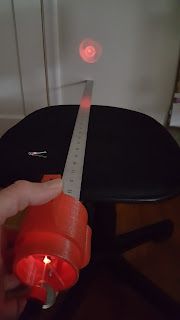 A new schematic was sketched to detail all the necessary transistor circuits necessary to power some of the devices. These were LEDs which required more power than an Arduino could supply. The flashlight LEDs were a good example since each LED could draw 30mA and an Arduino pin can only supply 20mA. 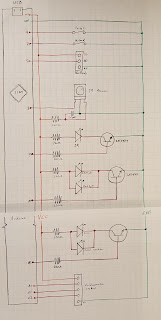 The flashlight circuit was built on a breadboard but it didn't behave as I expected. Instead of producing blinding light it was the same level as though the transistors were not used. Once the protecting resistor was reduced the light was adequately blinding.

With a tested circuit, it was time to build a soldered version that could actually go into a tagger. Stripboard was selected since the trace runs could get long. Not long into the building, it became obvious that stripboard was not a suitable solution. This circuit really deserved a custom-made circuit board. I haven't made circuit boards since college but it is a well-documented technique. 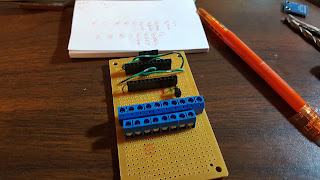 Only one transistor circuit was added before the idea was scrapped

KiCAD was installed and the circuit was drawn in the software. I have previous experience with software like this, primarily EAGLE, and the addition of libraries and parts has made even the free software easy to use. In comparison to the old software it was easy to use. 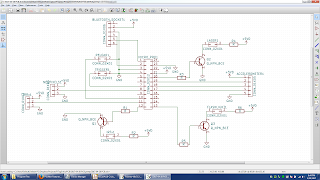 One of the key elements to software circuit designer is the autorouter. The autorouter takes the board layout and maps out the traces. Traces are the strips of copper that actually connect one part of the board to another. KiCAD doesn't have an autorouter anymore. All the traces had to be manually routed by me. It was a simple circuit so it wasn't difficult but it was tedious compared to clicking a few menu options. 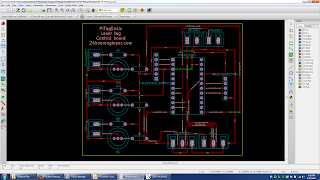