May 08, 2017
A paper printout was made as a test on a new laser printer. It was immediately obvious that the circuit board would not fit inside the pipe. Fortunately, no circuit boards had been produced but a new design will have to be routed. 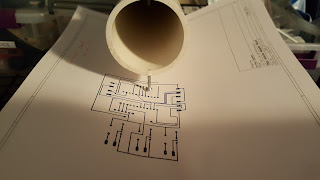 Printout next to pipe

KiCAD has an easy dimensioning tool and the shortest side of the first design was 70mm but the internal diameter of the pipe was 50mm. Since length shouldn't be an issue, it can be squeezed into a longer PCB. 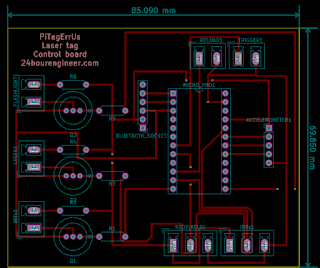 Each time a change to the layout was done the traces (connections between components) had to be redone. This was time consuming. While it didn't take that long on a small board, it was still frustrating. Many PCB creators come with an autorouter to automatically create the traces. Currently, KiCAD doesn't seem to have one installed. While they aren't perfect, they can save a lot of time. For this reason another PCB designer was investigated; EasyEDA.

The schematic was recreated in EasyEDA which was a straight-forward task after exercising in KiCAD. All the components, including the Arduino Micro Pro, was already installed with EasyEDA so no complicated procedures were necessary to create a new part. 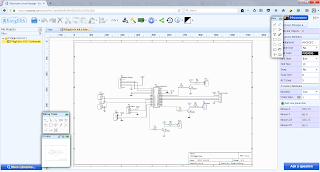