May 09, 2017
Yesterday, everything was converted to EasyEDA, a web-based circuit board designer. KiCAD was good, but the lack of an autorouter was disappointing. Fortunately, I learned this lesson a simple project and recreating the work was simple.

The autorouter had no trouble creating every trace on a single layer of copper the first time it was run. In fact, I had little confidence when I ran the router the first time. I assumed it would have errors and I would have to add some jumpers or at least some vias but it worked without any issues.

Routed board with highlighted traces

Exported Gerber files from EasyEDA were imported to KiCAD for printing. Unfortunately, KiCAD doesn't import drill holes so the pads were all solid instead of hollow but a close-up picture showed that the traces were clean which should produce a good circuit board. 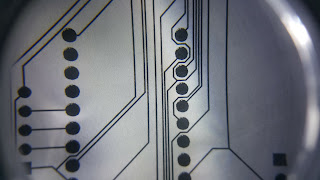 The paper print of the circuit board fit neatly into the pipe this time. This design constraint was the reason for switching to EasyEDA since it featured an autorouter and reshaping the board wasn't a tedious exercise. 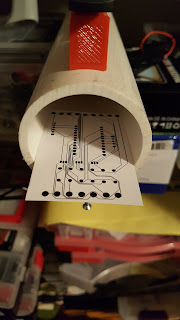 Printing from KiCAD wasn't viable. There was trouble printing multiple copies and it still printed solid pads instead of hollow circles. Printing from EasyEDA was figured out but it would add excessive material around the transistor pads which made them so large they touched. This problem could be overcome by using a knife to slice away the toner after it had been adhered to the copper. 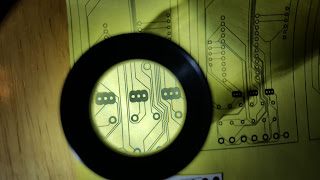 A print of three circuits was made on inexpensive transfer paper then ironed onto the copper/fiberglass laminate. Directions for making circuit boards can be found all over Instructables so I won't go into detail here. The transfer paper was torn above one of the three boards so a corner was peeled up before it was cool. In the picture, some of the melted toner can be seen sticking to the copper and the transfer paper.

Peeling a hot board. Never do this

Everything was allowed to cool and the transfer paper was easily removed. Some of the toner didn't transfer well enough and it can be seen on the yellow paper. Another attempt will be made to make a good transfer. The lines which did transfer look great. 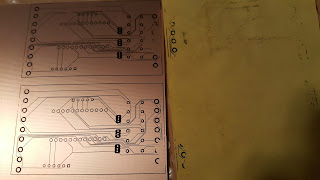