May 15, 2017
Once it became clear that the previous etchant solution was not going to work, regular ferric acid was purchased. Ferric acid has its pros and cons. Ferric acid needs special disposal considerations because it can't be flushed down the drain however it is the most commonly known board etchant for a good reason.

Two boards were etched at the same time in a shallow bath of the acid at room-temperature. Ideally, etching would take place in a large bath of warmed acid. 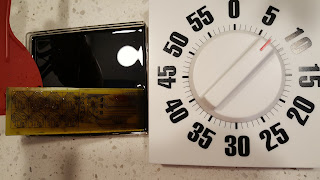 There is a second board beneath the dark acid

The resulting boards looked nice and seemed like a successful etch. Some of the sensor boards on the left side of the picture did not turn out well but they were poorly transferred and therefore not the fault of the etching. 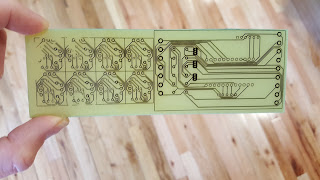 The used acid was stored in a labeled container. It can be reused with other boards and keeping it safely stored will make disposal easy later. 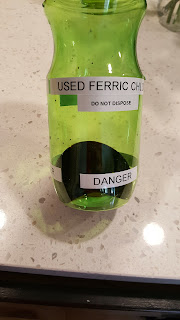 Not all of the traces were perfect. Under magnification, it was easy to see some of the problems. The broken pad won't be a problem because there will still be plenty to adhere to while soldering but the broken trace next to it will have to be bridged with solder or a conductive paint. This was the worst spot on any part of the boards. Considering I haven't made a circuit board in nearly a decade, this was pretty successful. 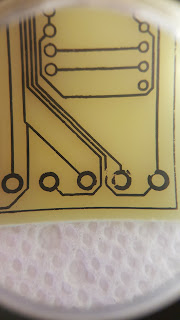 The areas where toner needed to be cut seemed to have etched well. Stirring the acid during the etching process may have helped etch into the narrow valley. If this had not worked, it would have been possible to manually cut the copper with a blade. 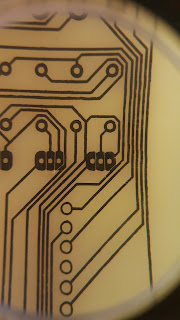 Small breaks in the traces, like in the picture below, may be difficult to repair since the clearances to the next tracks were so small. In reality, this is a problem the board design more than the etching process. The traces were too thin and the clearances were too low. Another revision to the board was in order. 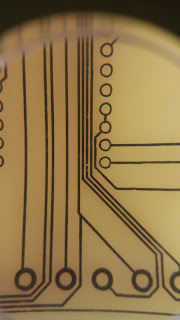 Acetone was used to wipe away the black toner to reveal the copper underneath. Acetone was used simply because it was handy, in the past, I have done this step with a scrubby pad and elbow grease. 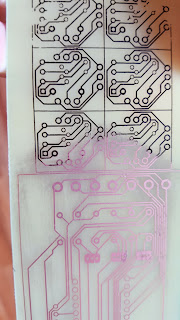