The first version of the PCB was printed, transferred, etched in costly chemicals, and components were soldered to it. Great. When I was trying to figure out where to place each component, I noticed that nothing lined up. All my components were on the wrong side. This wouldn't have actually been a problem for anything except the transistors and Arduino. In fact, if those were soldered to the other side of the board, it may have worked. But that solution was inelegant and prone to other problems.

Mirroring the transfer was the obvious solution but a host of other problems was seen with the design including its size and layout. 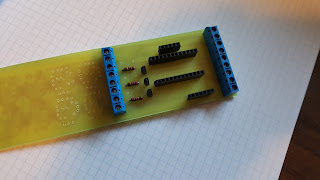 First version of PCB with one problem

A second revision to the board was created. It was a simple matter with EasyEDA. The schematics were already done so revising the layout was simply a matter of starting with the last step. For the second revision, the Arduino was turned 90° to ensure access to the USB port while it was not inside the pipe. Great for updating the firmware. Descriptive text was written right on the copper layer so identifying the parts was not difficult after printing. This text had to stay clear of any traces. The board was shortened and condensed to the point that two could be printed on a single blank copper board. These prototyping boards were quite inexpensive since they were also one-sided. 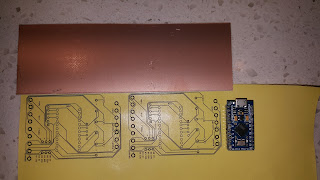 Two optimized boards can fit on one blank 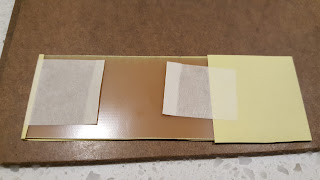 Misguided attempts at streamlining the process

The next uncertainty was etching with the new recipe of etchant solution. If you recall, the first batch was mixed with the wrong proportions. Luckily, it was a simple 2:1 ratio so making it 1:2 meant that all I had to do was mix equal parts of the existing solution and hydrogen peroxide solution. That was done by measuring up to the same line on the bottle and using the label as a marker. 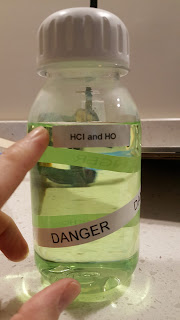 Using a label to mark level

The new solution worked well enough and it was clearer than the ferric acid I used last time. The problem was that the board etched well at the sides first but the insides were still thick with copper. When the second board was etched I rocked the solution back and forth the whole time. This etched the board remarkably fast, probably five minutes, and it was even. 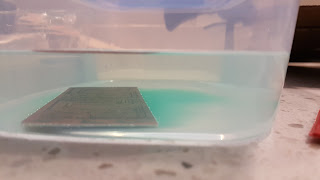 The boards were cut apart on some table mounted shears. With four boards to trial the circuit, one of them was bound to be usable. 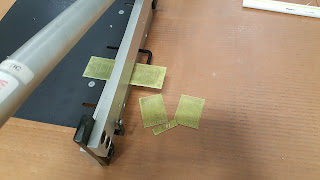