The show on digital human rights was an experiment with a different show structure. Instead of scraping the bottom of the well for content exclusive to grinders, Tim and I found something that could affect us all very soon. On top of that change, we also

Two boards were made last week. Parts were soldered to populate them. An IC socket was installed where the Arduino would go. In the past, female header sockets have been soldered here to receive the Arduino but an IC socket is neater. 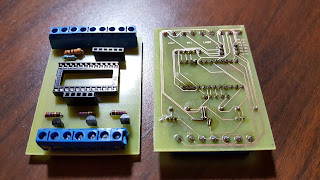 A tiny break in the traces was found but it proved devilishly hard to photograph. It is visible in the full-resolution picture if you click the picture below. These "opens" make testing difficult but they're easy enough to find with a continuity tester. 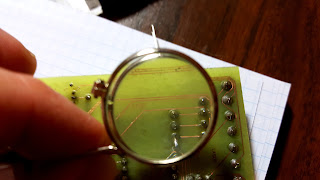 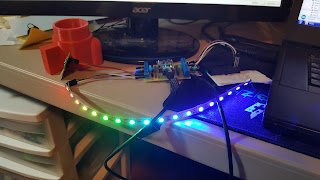 Inputs also tested well and feedback from the switches came when a small break was circumnavigated. The problem, in every case, was the transistor circuits. I had hoped that the problem was the thin traces and the scant transistor footprints.

Testing the inputs by monitoring the serial output

A new layout was created with thicker traces, to avoid breaks and transistor footprints with larger pads.

Despite all the back results while trying to streamline the transfer process, a new method was attempted where the transfer paper was water-logged before peeling it away. By a stroke of luck, it worked marvelously to peel away the limp transfer paper. 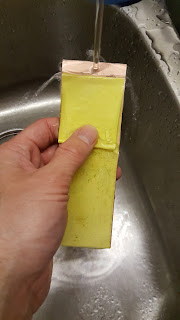 The revised boards were etched and drilled. Previously, a set of industrial shears was used to cut the boards. This time, a razor knife and straight-edge was used to score the line between the boards and they were simply snapped apart. The edges were sanded outdoors. 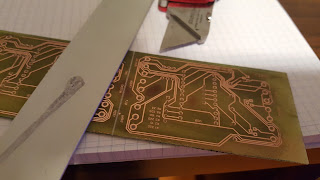 Scoring the boards to be divided

All the circuits tested perfectly the first time! The only problem was that the transistor silk-screen layer showed the wrong orientation. In other words, the transistor needed to be installed backward of the direction indicated on the circuit board. 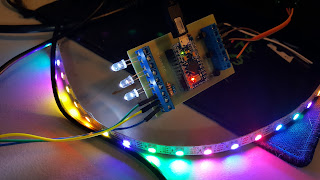 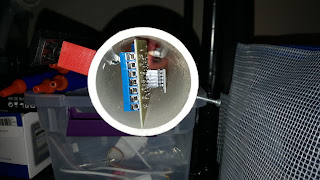 Placing the populated board inside the pipe to test clearances