June 10, 2017
Wiring for the forward array was sloppy. It did the trick and it seemed electrically sound but it wasn't pretty. Everything was run to a small piece of prototyping board so wires could be joined as necessary. All the ground wires could be tied together, the two flaslight LEDs were tied together and the leads for the laser and red LED were tied to each other. 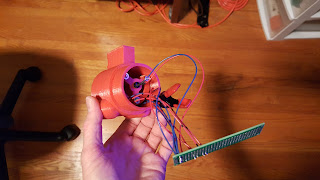 Electrical wires on the forward array

The front of the forward array was assembled with a lens for the infrared emitter, the laser diode was glued in place with superglue and the LEDs were held in place with panel-mount clips made for this exact purpose. It was exciting to see the business end of the tagger all dressed up. 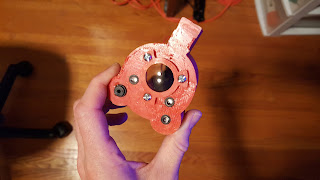 The wires from the forward array were terminated on the PCB as well as the wires for the LEDs, the trigger, and the reload switches. A 90° angle micro USB cable was purchased to bring the data line out but there was not enough clearance. Dang. 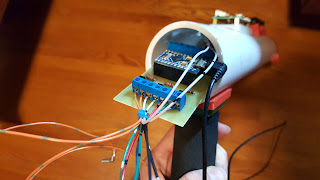 Many hours were spent brainstorming a way to bring the USB cable out of the pipe. In the end, I decided on a lid that would cover a hole in the pipe where the PCB would enter. Now, instead of feeding the PCB through one end of the pipe, it would have a slot in the top of the pipe were all the wires could be run.

The model for the Raspberry Pi holder would be used since it could also carry the computer. It was offset to make room for the USB cable to come out and given small fingers to hold the PCB on the inside.

Position and model for the PCB holder

The first model didn't cover the hole in the pipe and had too many fingers. The second model was larger and had fewer fingers. It also had a designated hole for the USB cable.

The second model seemed sufficient. It could cover a pipe hole large enough to pass the PCB and it allowed access to the USB port on the Arduino inside. This one was also symmetrical although the Raspberry Pi will still be mounted on the outside. 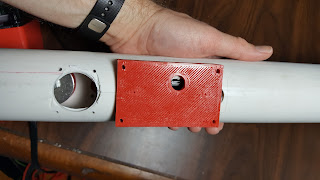 
Assembly was done for the rest of the tagger. Wires for the LEDs and infrared receiver were run out the back and need to be terminated but once the are attached, the first tagger will be complete. 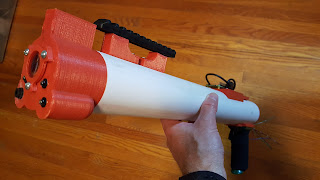