Tim and I are both white males in monogamous relationships with women but we dedicated a show to the people in the grinder community who aren't so...white bread.

Gender in a post-human world is going to change if you ask any grinder. We don't know how far it will go or how fast but we speculated and we're both excited.

The first tagger was cobbled together after days of assembly. Pages of notes were taken about how to revise the models into a more usable tagger that would be easy to assemble. Notes were from some of the newer parts like the PCB holder all the way back to some of the first parts, like the butt plate which needed an LED ring holder. 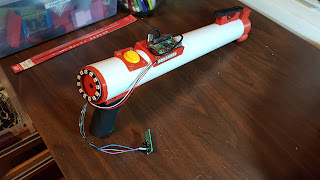 A list of part modifications was made and the parts were modified as necessary. The parts which saw the most changes were the PCB holder and the butt plate. These parts were under heavy scrutiny while the first tagger was being assembled.

A circuit board was designed and printed to hold infrared sensors and an addressable LED. This may be a symptom of scope creep since individual sensors could be considered a luxury while the tagger is still non-functional. 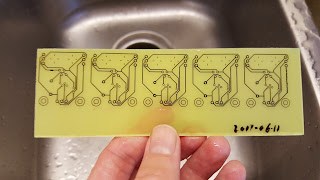 After printing and etching the circuit boards, they were drilled. Drilling wasn't as straight-forward this time since the RJ11 telephone jacks had mounting posts. The holes were larger than anything I had drilled before and that caused problems since the 3.5mm drill bit for the moutning posts wouldn't fit into the Dremel drill press. These holes had to be drilled with a slower hand drill which caused the drill bits to walk and they were actually too close together. 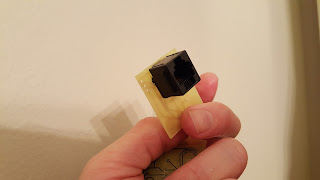 RJ11 jack mounted to a PCB

A foregrip handle was made for the tagger. This handle would allow easy placement of the offhand and added to the aesthetics of the tagger. The big difference between this piece and the other was that this one won't use screws or bolts to hold it in place. Instead, it will require glue. This was done for structural integrity and because it might feel strange to have an obvious bolt hole in the handle. This also prompted a revision to the handle model.