June 24, 2017
The LEDs used for the color-changing lights were designed to run in series. The data pins of each LED expect to see a signal from a single LED and they expect to transmit a signal to one LED. They were tested in parallel to confirm that they would function at all. Fortunately, they worked exactly as hoped. When connected in parallel, the connected lights all change identically. 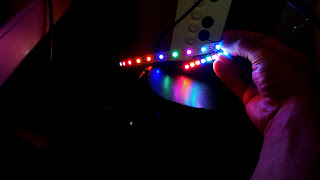 A homemade board with the RJ11 socket and an addressable IMT LED was also part of the design. At first, the LED was inserted backward which slowed the development but then it turned out that the telephone cord wouldn't properly latch in the socket. In other words, the method of attachment, which the board was built around, wasn't going to work. 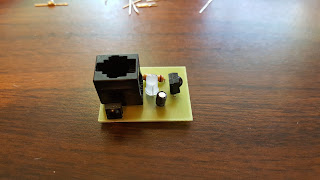 Assembled board with insertion mount devices 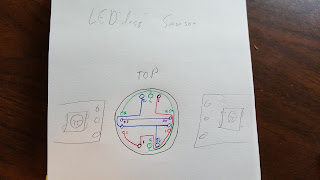 Sketch of sensor circuit board

A round board didn't make much sense if it was going to be inline with an LED strip but curved edges were logical since it could be attached to clothing as a wearable. The removal of the LED further reduced the complexity and the circuit could easily fit on a single sided PCB. 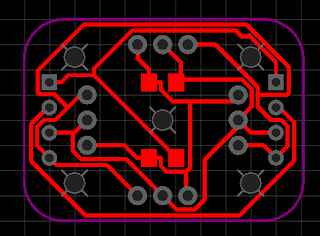 A day was spent revising the circuit for problems like an unnecessarily large graphic for the infrared sensors which resulted in some crossed pins that had to be organized. The final PCB was rendered from the layout, top and bottom. Since it was symmetrical, it seems like the holes don't move but only the top image has the surface-mount resistor and capacitor.

Circuit board to order