June 25, 2017
After learning from the first tagger assembly, long wires were soldered to each of the components for the forward array. Even components which were meant to be wired together, like the two white flashlight LEDs, should be wired individually. Unique wire colors were used and recorded so they could be easily identified later. 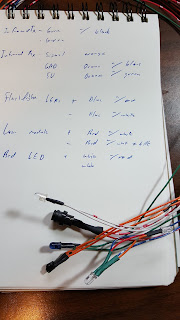 Components for forward array and labels

The forward array was assembled with all the components. This meant that the holes which were too small had to be drilled so they could fit the LED holding clips and the hole for the laser module had to be drilled out too. 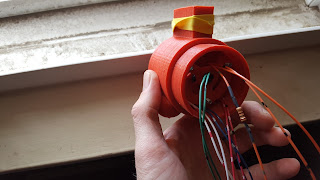 Back of array with wires falling out

An infrared sensor was added to this array even though it was absent from the first. Normally, power filtering components would be added but this time only a resistor was used on the power line. A single resistor didn't prohibit the wires from passing through the plastic shell whereas a capacitor would have been problematic.

The sensor was mounted on the front by gluing it in place and holding it with a rubber band. It was placed near a breezy window to keep the fumes from damaging the clear lenses. 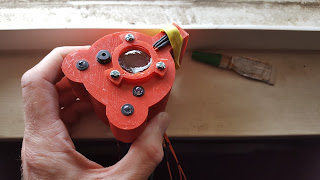 Front of array with sensor glued and banded in place