July 22, 2017
A project page on HackaDay.io was started for PiTagErrUs. Images from this blog were collected and uploaded to HackaDay. GIFs were not allowed to be uploaded but they could be linked so anyone planning to make a project page there should be aware that they will have to take special precautions with animated images. This may change in the future.

Pipes were cut to make some new taggers and some of the dimensions were wrong. New diagrams were made to reflect the correct measurements. I also learned a value lesson about removing the tape too early. The center lines drawn on the tape also help align the handle and foregrip. 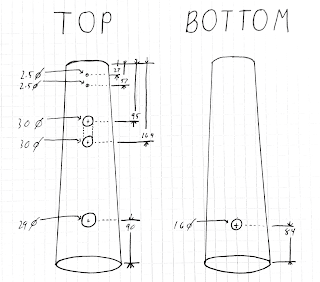 Size and space for holes in pipe

New center lines were scratched into the pipe with a pair of scissors. ABS cleaner and cement were used to affix the foregrips and handles. This method of adhesion worked really well and provided a great bond but it is not reversible. The longest pipe in the picture accidentally had the handle and foregrip attached at the wrong ends so it will likely have to be scrapped. 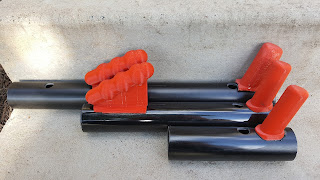 Handles and foregrips glued to pipes

Clear diagrams were made for the parts. This was important because instructions were being written for Hackaday.io and I knew that it could be confusing as I tossed all the names around. A similar image as also made for the small parts inside the forward array since they were too small to show on this image.

Instructions and explanations were written on Hackaday.io and a project page was started. All the images were from this blog but the text was written exclusively for Hackaday. The project could be copied to Instructables but it might be outside that demographic.

Scrolling through the project page

The writing for the Hackaday project was finished and proof-read. 4 500 words were written for this project and that doesn't include the six build logs which were simply copy-pasted from this blog. The text in these weekly summaries are also written for the purpose of the summaries, instead of just copying from other blog entries. You may notice that they are written more casually.