August 28, 2017
I personally think that electronic business cards are cool. I have been told that my eye for aesthetics isn't what most people find pleasing but I love this thing.

Passive RFID communication works by receiving electromagnetic waves from an antenna and using that energy to respond with stored data. That energy can be harvested by any coil and put to use.

The third simplest schematic imaginable was made on EasyEDA. It was only the third because there were three components. An LED was surrounded by two single-header pins. After the schematic, they were put on a board the size of a business card and traces were run around the outside of the board. Traces around the outside of the card acted as an antenna to harvest energy and they fed it to the LED under my name.

The front of the board has an LED, red in this case, which simply turns on when enough power is gathered by the antenna. A jumper was used to bring the signal from the far side of the antenna but this would not have been necessary with a double-layer board. 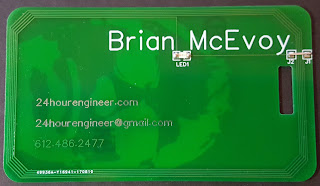 The back of the card was intentionally left blank of any traces. For this reason, it would be possible to order the cards with only a single layer of copper and get them less expensively. A two-tone image of my face was used as the rear silkscreen because I had nothing better to use the space for. 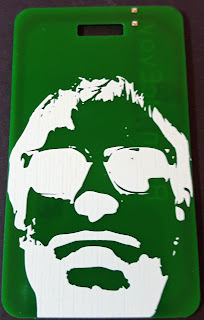 My vanity in action

The image below was taken while the card was backlit by a computer monitor. It's possible to see the rear silkscreen, my face, while the letters on the front are also visible. The PCB was 0.6mm thick, much thinner than a typical PCB and this thickness made it more transparent. 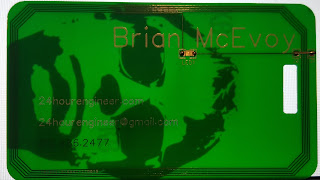 A PCB business card is one thing, but one that actually works with electricity is another issue. An NFC reader was powered to test the functionality of the card it it worked very well. The reader was a USB model and put off a strong field.

Testing was done with a mobile phone, a mirror, camera tripod, and a black backdrop. As the animation shows, the field from the phone is not a continuous act like the USB reader. This may be done to preserve battery life.

NFC sensing from a phone