March 03, 2018
Hackaday articles have been recognized as a day's worth of work. They require a significant time-commitment, and they were being avoided because there wasn't time to also complete my projects. This article was about a guy who took an old sewing machine and added an X-Y table so he could use it as an embroidery machine. It was quite the up-cycle. 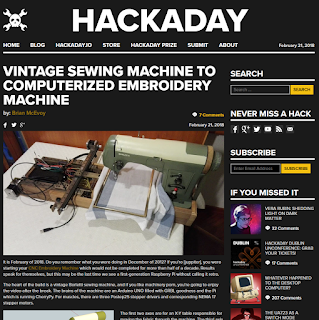 A wholly new project was started. This one leveraged the reproducibility of laser cut parts with the necessary precision of musical instruments. The concept was to cut wooden tines with ascending lengths so they would produce a musical instrument which anyone could reproduce with only a laser engraver and some material. If you peeked at the picture, you probably noticed that my tines were not a usable size to produce any worthy sound. 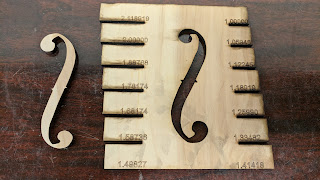 First version of the TineBox

The second version changed a few things. Two sound-holes, longer tines, narrower tines, tines on only one side, and notches meant to lock into a cigar box. The cigar box seemed like a logical choice since they were inexpensive, suitably sized, and they have a history of makeshift music. It still sounded like garbage though. 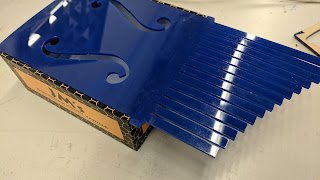 Instead of relying solely on the shape of the laser-cut material, I changed the design to utilize music wire. Music wire is just a springy steel sold by the foot, but in this case, it's actually used for a musical instrument. Instead of cutting tines to a specific length, I cut out a series of tuning staffs which were cut to lengths in the musical note progression. The same staffs were used to cut metal tines to the correct size. This version didn't sound like a ceramic falling into a steel sink. There was still room for improvement. 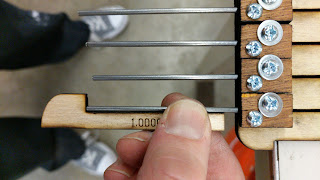 For the first time in a long time, the week was not all or mostly about Charged: DesertIrish. Fortunately, the news this week from editing-land was that all the work has been good except that the traces of the next story should be wiped out. I thought I included two story arcs in the text, but there was only one. This will make the next editing phase easier.

Here is a link to the text as it is being edited. Charged: DesertIrish partially edited