We've been enjoying the live format of the show. It has been a good chance to show how we act and react behind the scenes and hopefully provide some insight into what goes on behind the scenes. It has been tempting to stop editing the podcast and simply put out the video and a separate audio track but there is a lot of pride riding on the edited version, for me anyway. Here is our unedited video recording of episode 46. Show page for the edited podcast with episode 046.

This article focused on a team who dosed spiders with carbon nanotubes and graphene to make Carbon Augmented Spider Silk. This wasn't exactly a hack since it was more of a study, but the result was silk three times stronger than any naturally occurring fiber, so it was certainly worth looking into. This was not a peer-reviewed study. 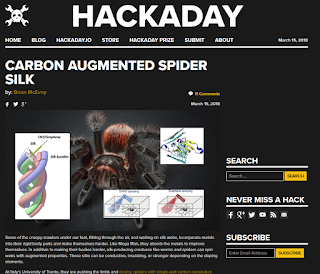 A few new tricks were tried with PCB business cards. The first thing was a smaller NFC antenna. This was done to add several lights to a single card and because they could locate a field with more precision. Unfortunately, the antennas were too small, and they never worked. Dang.

The second thing I tried was making a card which didn't need an outside magnetic field to light up. This operated on the idea of shaking a magnet inside the card and generating a field through mechanical force. This had a long flexible band of PCB material with several traces around the outside, but despite a strong moving field, there were not enough coils to generate enough voltage.

DynamoCard with too-few passes of copper

The DynamoCard would light up in the presence of an NFC field, so that told me what I needed to know about the length of the coil and the number of coils. 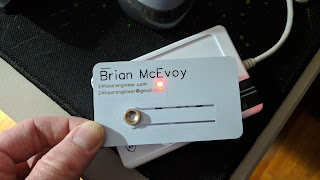 DynamoCard lighting up in the wrong circumstances


Speaking the Same Language as a Wireless Thermometer is a convenient way to buy sensors without having to do any soldering, powering, or enclosing. The hacker also found out the advantages of using a superheterodyne radio as opposed to an ordinary one. Spoiler, ten times the range. 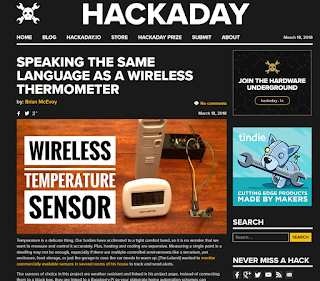