May 17, 2018
All the parts were ready to be assembled. The plan was to dress up the top of the enclosure once everything was finished but it was also important to keep the screws as short as possible so they would not touch the desk. Imperial machine screws were available, so measurements were taken in inches. After carefully measuring with a medium-precision caliper, it was clear that the easiest method was to just grab the screws and hold them next to the enclosure to find a good fit. Both halves were assembled with the circuit boards inside. The bottoms were not installed but the enclosure was being used to keep the boards in place. 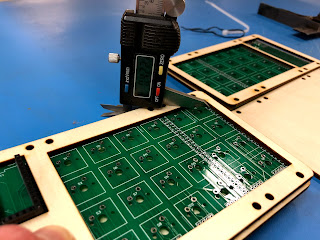 Jumpers were added between the PCBs once they were installed in the enclosure and could not shift. Only four small jumpers were necessary between each board. Old component leads were trimmed and used. Long four-conductor wires were added to the power, ground, and serial connections of each half of the keyboard. This wire would allow the halves to be placed comfortably around the desk. Holes were cut into the enclosure to allow the wires to pass through. This hole can be seen in the background of the picture. 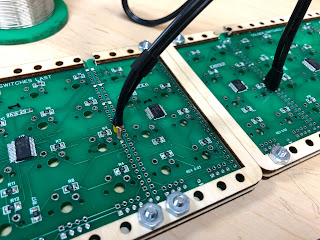 The halves were assembled to ensure a good fit and prove that the enclosure would hold the linking wires in place without additional support. Everything seemed to be ready for testing. A Teensy-LC needed to be purchased for testing since the last one was given away. 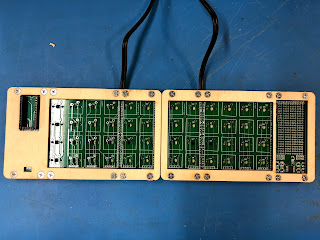 Halves of keyboard linked and enclosed