June 13, 2018
To make it easy to see which keys served which function, and to decide on future modes, a quick sketch was done with all the keys and the proposed second mode. The dark letters on the top were drawn with a pen because they were what was programmed into the keyboard for the normal typing mode. In the lower portion, the keys shown in dark pen indicate that they were unchanged from the first version. 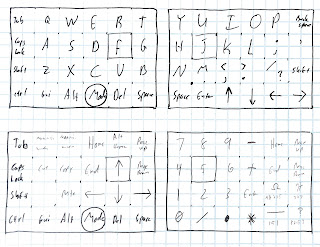 A spreadsheet was created to clearly demarcate the function of each key while in a particular mode. In the spreadsheet, the fields of each mode were color-coded to match the LED color of that mode. This would change if the number of modes changed. Currently, four modes were available, but only three had anything planned for them. The fourth mode will likely become a macro keyboard for browsers or audio editing in Audacity.