July 17, 2018
Implantable magnets have been a tricky subject for biohackers for quite some time. Recently, a magnet retailer released a magnet with a coating already in use for some medical implants and one which biohackers tried coating in home-labs. The coating is titanium nitride, which is often described by its chemical symbol, TiN.

Even though these magnets could be perfect for what we want, they are not marketed for implantation, and from a legal standpoint, they should not be. Some people on Biohack.me have been watching this development and as of writing this, some people have already implanted these magnets. To the best of my knowledge, those who have implanted tested the magnets with a saline soak which is the defacto test for the coating. If salt water can interact with the nickel coating below the TiN, it will bulge, corrode and become quite evident. TiN will not react with salt water, or the human ecosystem for that matter.

This experiment is to test the coating on ten magnets to see when and if they fail.

Glass vials were purchased so that magnets could be soaked in separate containers to avoid any magnetic interactions while submerged. All the vials were placed in boiling water for ten minutes, but the caps were untouched. This was not meant to sterilize for implantation by any means.

After boiling, the vials were allowed to drain and dry for eight hours next to a very stylish coffee mug. Drying was done so that labels could be attached to each bottle since the hot water inside was probably as good as anything else. 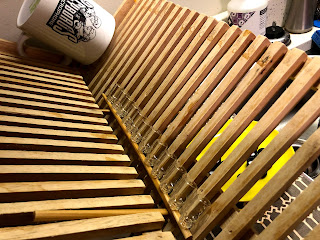 Drying vials in a dish rack

Test materials were gathered. In addition to a saline solution, some of the vials would contain some detergent, and some would have salt with detergent. The saline solution was a few grains of iodized table salt. The detergent was Dawn Ultra dish soap. Water was ordinary Minneapolis tap water. 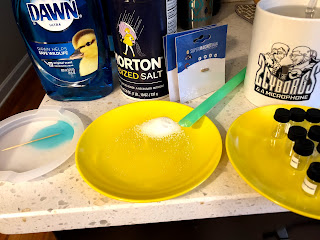 Components for this test

Water was added to each vial by inserting a straw into a mug of water. The level of the water in the mug ensured that each vial was filled to nearly the same volume each time. 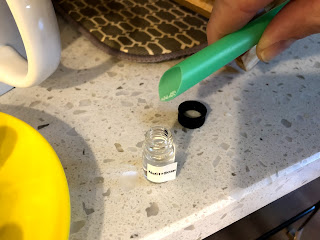 Soap was added by soaking a wooden toothpick in detergent and inserting it into the water for three seconds while spinning the toothpick. 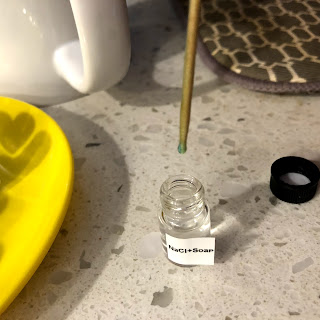 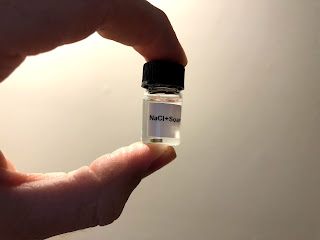 Single magnet in a jar of salt water with soap 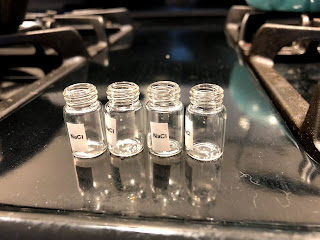 The jars were separated so the magnetic fields wouldn't interact with one another. An ice-cube tray was selected since the spacing was even and there was plenty of room for ten vials. It also made it easy to carry the vials together so they could be put out of the reach of any cats. Naughty naughty cats. 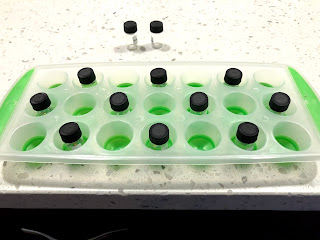 After twenty-four hours, one magnet showed the signs of a compromised coating. There was a ring of rust-colored residue on the bottom of the vial. The magnet's surface was unevenly colored. There were flakes suspended in the water which can be seen in the animation below. This magnet was in a solution of salt water without soap.

A magnet without any signs of a compromised coating can be seen below. The magnet looks the same for this picture as when it was put into the solution. 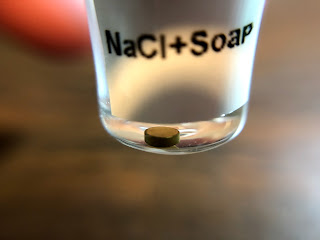 The failed magnet was removed from the experiment and its failure after twenty-four hours was noted. The remaining nine will soak for ninety days. They will be checked periodically, and any more failures will be noted. 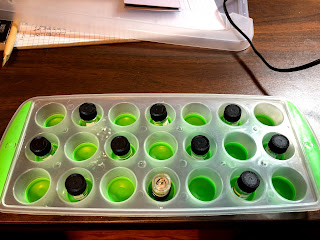 One failure out of ten tests