August 21, 2018
Years ago, I started this project and it failed, but there is knowledge in failure. Mostly, I learned that you cannot cut a keyboard in half and expect it to work. Hopefully that tidbit will help others out and keep them from ruining a usable keyboard. Admittedly, the keyboards sacrificed for this project were inexpensive silicone ones which won't be missed.

This project was inspired by the Vertical Ergonomic (Tie-Fighter) Keyboard Instructable. Two improvements were made, specifically replacing the connecting pieces, which were speaker mounts, with more versatile camera mounts, and using a pair of inexpensive silicone keyboard instead of a split keyboard which were expensive or hard to source. A USB hub was necessary to limit the project to a single USB port. Four port USB hubs are inexpensive and easy to buy so two ports will remain open for the future by the user. 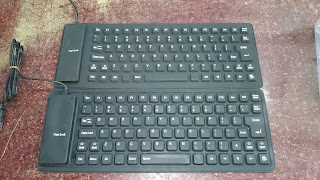 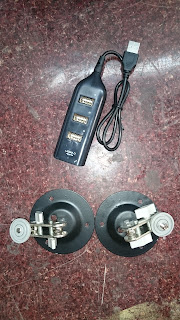 Two wooden blocks were cut which were as tall as the keyboards and as wide the edge to the space bar. The picture shows an example of the width which lines up with the space bar. This board is going to back the flexible keyboard for each hand so they have to be sized to fit all the keys for the left or right hand. Sand any splinters off. 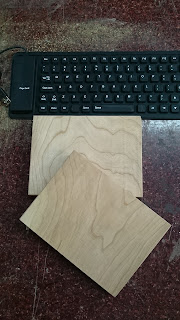 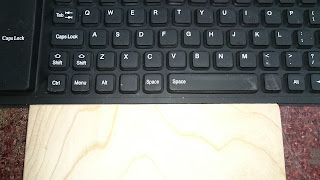 Width of a block

Scissors were used to cut away the unnecessary keys of the left hand side of one keyboard. These keys could be easily cut away because they did not contain any of the circuitry necessary for processing or transmission. The box on the left side of these keyboards contained that circuitry while the keyboard merely contained a couple membranes which contacted one another when keys were pressed. In the case of these keyboards the membrane was clear and had white traces on it. 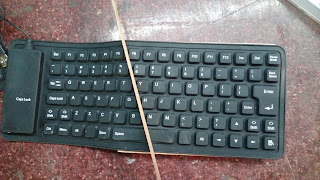 Determining which keys to cut away. Keeping the left hand keys only 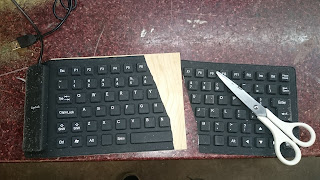 Keyboard cut away from left hand side

On the right handed part of the keyboard it was not possible to simply cut the keyboard away, it was necessary to remove the unwanted keys so they could not produce unwanted key presses. The silicone keys were easy to remove, a simple cut from a razor on the side and the buttons tore off. Unwanted buttons were the ones which would not be on the wooden slab or typed with the right hand. 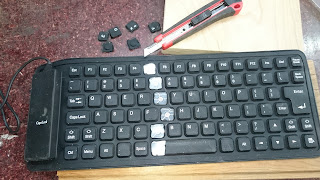 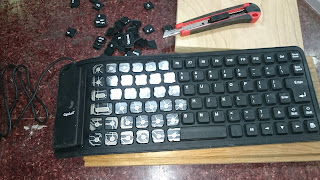 Keys removed from left side 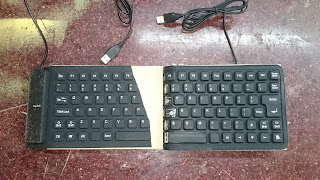 Holes were drilled in the back of the wooden pieces so a camera mount could be placed at the center of each. These camera mounts will provide articulation between the keyboard halves. Each mount will be connected to the other by a 1/4-20 coupling nut. Exact measurements were not taken to ensure the mounts were centered accurately. Their flexibility will allow them to compensate for minor inaccuracy. 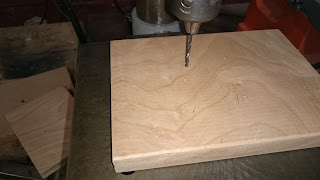 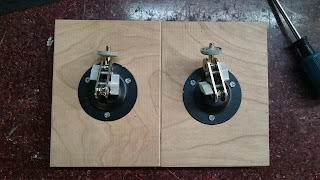